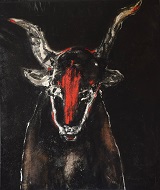 In 1973, Margareth Dorigatti (Bolzano Italy, 1954) enrolled in the Accademia di Belle Arti of Venice, where she studied with Emilio Vedova.
In 1975, she moved to Berlin to study Painting, Graphics and Photography at the Hochschule der Künste. In 1977, she founded an Atelier that was frequented by eminent artists and theatre people living in Berlin.
In 1979, she was awarded a grant to travel to New York and photograph Lee Strasberg teaching at the Actor's Studio. She began exhibiting her work in private galleries in Berlin in 1980 and, in 1983, with Joachim Szymzcak, took on the enormous project of decorating the Berlin underground network: 75 paintings in eight different stations.
She won the Internationalen Bauausstellung competition for the decoration of the façade of a historic Kreuzberg house.
In 1984 she moved to Rome, where she has continued her work as a painter.
She has exhibited in Italy and abroad in private galleries, public venues and museums (Rome, Paris, Milan, Pescara, Bolzano, Modena, Bologna, Berlin, Nimes, Lyon, Cologne, Bonn, among others). She takes part in collective exhibitions in Italy and abroad.
She is Professor of Decoration at the Accademia di Belle Arti in Rome.
Dorigatti is an artist of elective affinities. She is more inclined to look for correspondence in the fields of literature and music than in the visual arts, where she has distanced herself from Postmodernism, returning to a sort of classicism in the ethical, structural sense, to questions of form and substance. Her subject matter has thus tended to be the world of myths, gods, saints and demons. [Eva Clausen]