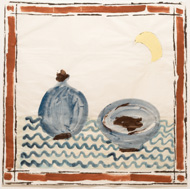 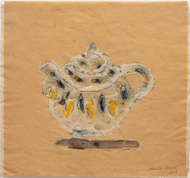 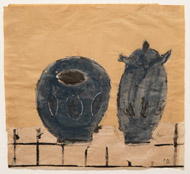 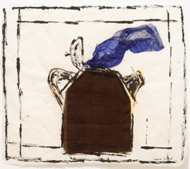 Born in Naples in 1931, Isabella Ducrot has been living and working in Rome for many years.

In her extensive travels she developed a particular interest in fabrics from countries east of Europe and began studying the many differences in the textile traditions of China, India, Turkey and Central Asia. Over the years she has amassed a collection of rare fabrics of historical interest, and has long used textiles in her own work.

In 1989, she created 12 paintings made up of panels that incorporated fragments of an Andean fabric dating back one thousand years. She subsequently spent two years creating a rich series of tapestries around a recurring motif in Ottoman culture, the cintamani pattern.

She presented a large tapestry at the 1993 Venice Biennale that is today part of the collection of the Contemporary Art Museum of Gibellina, Sicily. In the 1990s she also began using paper, to create a series of large drawings and monotypes in black and white.

In 2002 she created a series of paper tapestries entitled "Memorie di una terra", from memories of a trip to Afghanistan, which were exhibited at the Milan State Archives. A large collage (4x4m) of fabric, paper and paint was exhibited and acquired by the Galleria d'Arte Moderna in Rome, while a large pastel on silk is part of the collection of Rome's National Gallery of Modern Art (GNAM).

In 2005 she created two mosaics for the Piazza Vanvitelli metro station in Naples.

In 2008, she had an individual exhibit at GNAM entitled "Variazioni" and published Text on Textile (first in English, then later in a slightly different form in Italian as La matassa primordiale).

In 2011, she was invited to exhibit her work at Venice Biennale, Italian Pavilion.

In 2014, GNAM featured another individual exhibition of hers: "Bende sacre". In the same year solo show at Galleryske (New Delhi) and participation to Art Basel fair.

In 2015, she is invited by Achille Bonito Oliva to exhibit her installation "Effimero" at Archaeological Museum in Naples.

She has created backdrops for the theatre, concerts and the ballet (Rome Philharmonic, Lecce 'Balletto del Sud', Rome 'Olimpico' Theatre and 'Palladium' Theatre).

- An interview with Isabella Ducrot on RaiSat (in italian).