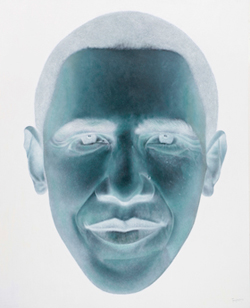 I Am the President
Between Identity and Anonymity

By means of the negative, by turning the image onto itself, the artist reveals a fourth dimension of the subject, an introspective identity, an internal image other than the schema of the bodily self, reaching out to "the other side" of portrait, the "proximal self" which is arrived at through a sort of pictorial snapshot.

The seven works embody the act of the artist, who will remain anonymous for the entire duration of the event.

In her critical essay on the exhibition, Marina Miraglia writes:

"In this case, the choice of anonymity aims at focusing the viewer's attention on the strategies adopted by the artist. By involving the viewer in those strategies, the artist reflects, personally and along with the viewer, on the course of art itself, which now more than ever communicates through the multiple forms of the âpres time: citation, the simple 'translation' from one iconic language to another, rendering, scanning, contamination.

Painters often leverage on the possibility of art to always re-actualize the meaning and value of images from a more or less recent past, whether they be authorial or not. Observation thus becomes key, as do the interpretation of the present and the aid that implicitly comes from photography, which, by statute, bears within itself the presentness of the shot and of the imprint - Benjamin's hic et nunc, Barthes's past of the has been, Krauss's future of discursive spaces."

"Ideally, I am looking for a relationship between the viewer and the work of art which will be as little as possible affected by external influences, be that the artist's 'name' or current market conditions. It is in this spirit that I proposed to keep the identity of the artist from the public, freeing the work of the artist's signature, to restore its present significance as well as centrality in the relationship with the viewer."


Anonymity by design
by Marina Miraglia

The relationship between photography and art has spawned interesting reflections and studies since the birth of the former. The two art-forms have conversed constantly, although the link between the two has varied greatly in intensity, ranging from tenuous to strong. This connection is inherently charged with fascinating epistemological questions.

In contemporary terms, the rise of Pop Art gave birth to an interesting use of photographs in painting. Painters began using anonymous images lifted from magazines - often questionable in terms of artistic quality - to challenge viewers to reconsider their understanding of specific moments in daily life, or to reevaluate their perspective on the advertisements of well-known brands. The works thus created became iconic images that illuminate our understanding of mass culture.

This collection, curated by Daina Maja Titonel, explores this very relationship. The works on display are rooted in the late twentieth century tradition; they belong to a movement which saw the relationship between photography and art as crucial, and the birth of digital photography as a key turning point. The anonymous artist here on display uses iconic images found online freely; more importantly, he appropriates the language of digital photography, indulging in sharp contrasts of black and white, and in the provocatively symbolic enlargements of political figures (Merkel, Netanyahu, Benedetto XVI, Putin, Berlusconi, Queen Elisabeth II and Obama). The artworks that emerge are fascinating both in critical and conceptual terms.

More recently, the study of photography has begun to explore the art's anthropological implications. In this light, the amateur photographer's eye becomes a salient feature, while the traditional family album is noteworthy in its anonymity. In our artist's case that same anonymity goes hand in hand with the desire to spark a reflection on the evolution of visual arts. And this reflection on form swiftly changes into a reflection on art's relationship with time. Photography allows one to look back: the images beckon to a distant or recent past. Our artist's images are constructed with techniques that inherently imply this: renderings, scans, prints, all forms which translate one iconic language into another.

Painters have often turned their interest to the past looking to recreate known images independently of their authors' intent. This centers our attention on the painter's interpretation of the image, which is essential to its recreation. In the case of photography, the 'present moment' implicit in the act of taking the picture becomes a key element. The photograph's being 'shot in the moment' recalls Benjamin's hic et nunc, the past as a has been in Barthes's terms, or the 'future implied in discourse' postulated by Krauss.

When compared to the first artists playing with images in this way - I'm thinking of Duchamp in particular - the author on display stands out because he does not merely reproduce images, but rather uses photographic techniques within a figurative context. Although he plays with negatives and enlargements, he also superimposes painted images on these, giving the final image a second skin and thereby lifting it from anonymity. These images are thus isolated in space. Where the realism of the figures is reminiscent of a photograph, the flat brushstrokes and the absence of perspective set the image in an a-temporal space. The emotional impact thus developed overwhelms the viewer, aligning his perspective with the artist's.

Politically and ideologically, the characters become iconic figures of our time; simultaneously, they transcend time. The images' power is enhanced by the surfaces on which they are painted (wood, canvas, paper) and by the different formats used, such as the choice to portray Pope Benedictus's full figure. In this case, the image becomes a comment on both the timelessness of his gesture and the minute and detailed portrayal of his psychological and personal traits.