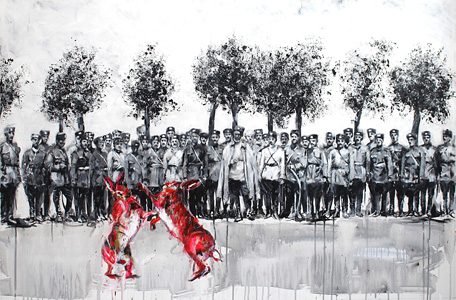 Ten large and medium-sized paintings will be on display. Vismeh started working on this collection in 2015, and she has already exhibited works from the same series successfully at Etemad Gallery in Tehran.

This collection was inspired by James Thurber's fairytale, "The Rabbits Who Caused all the Trouble" (1939). A group of animals are the main characters of the story, which focuses on the oppressive relationship between the rabbits and the wolves. The latter accuse the former of causing all of the world's calamities. The American writer uses the story to allude to the events that unfolded during the Second World War. The rabbits represent the Jewish people and the others who were oppressed at the hands of Nazi Germany. The other animals' indifference to what is happening portrays the role that other nations played as the Holocaust unfolded.

On her canvases, Vismeh replaces the wolves with the rooster, which, as a virile and aggressive fighter, is the Persian symbol for masculinity.

Thurber's allegorical fairytale is transformed by the painter into a powerful comment on the political situation in her homeland. Starting from the historical events that have taken place in Iran over time, Vismeh builds an evocative narrative of the different moments when its people had to live through hardships: the bombings, wars, and the obligatory removal and subsequent implementation of headscarves for women (the latter after the revolution in 1979).

As Helia Hamedani writes in her critical essay about the collection:

"The metaphorical story chosen by the Iranian painter addresses power struggles, diversity, and human rights with delicate irony. (…) Vismeh's chromatic composition - the dramatic use of white, black, and red - and sharp technique enhance this conceptual struggle. The animals are portrayed with colorful and almost expressionistic intensity. The human figures, instead, are often depicted in black and white, and underscore the allusions to historical events. They are static, as if caught in the frozen frame of a photograph."


LEILA VISMEH
Leila Vismeh was born in 1979 in Arak (Iran). She earned a degree in visual arts from the Art Institute in Tehran in 2009. Since then, she has taken part in numerous collective exhibitions (in Iran, Dubai, Germany) and has won several awards and competitions (among which, First Place of Illustration in Culture and Art Competitions in Central Province; First Place of Designing and Painting in Culture and Art Competitions in Central Province; First Prize, Statuette, and Appreciation Tablet in 11th International Festival of Puppet Theatre of Iranian Students, etc). In 2011, she had her first solo show at Day Gallery in Tehran. In 2015, her second solo show was hosted by the prestigious Etemad Gallery in Tehran. She is a member of the Iranian Association of Artists and the Iranian Center for the Development of Visual Arts.

"The Hunting" by Leila Vismeh
by Helia Hamedani

Once upon a time, there was a white canvas: a flat empty space that a painter might use to explore the multifold expanse of her imagination. The images that ensue are born out of the visible potency of the brushstrokes, the vibrant colors, the shading, and the characters; together, these form an allegorical narrative.

The collection "The Hunting" by Leila Vismeh was inspired by The Rabbits Who Caused All the Trouble (1939), a fairytale by James Thurber. The allegorical tale narrates the unequal struggle of rabbits and wolves. The fierce wolves believe their lifestyle to be superior and hold the rabbits responsible for all natural disasters. In the case of earthquakes, for instance, they blame the "rabbits' habitual thumping of their hind feet"; while in the case of lightning they trace the cause to their dangerous "lettuce eating".

One day, the wolves threaten the rabbits: if they don't stop causing natural disasters, they will be 'reformed'. Afraid, the rabbits decide to find refuge on a remote island. When they are about to leave, however, they are stopped by the other animals, who are not endangered. "The world does not belong to those who flee," the animals tell the rabbits, and thus persuade them to stay. Soon after, a flood upsets the animals' world and, since it is a well known truth that "carrot-eaters with long ears cause floods," the wolves imprison the rabbits. Clearly, this is done with the rabbits' "best interest at heart". A few weeks go by and the other animals begin to wonder about the rabbits' disappearance; they decide to question the wolves. The wolves respond that the horrible creatures devoured one another and declare the matter "a strictly private affair".

The metaphorical story chosen by the Iranian painter addresses power struggles, diversity, and human rights with delicate irony. In her paintings, Vismeh replaces the wolves with combat roosters, which were a symbol of aggressiveness in ancient Persia. The playful and social rabbits, inclined to run from peril rather than fight, are juxtaposed to the cruel roosters, who oppress them. The rabbits are often killed in the bloody struggle, at times merely in sport.

Vismeh's chromatic composition - the dramatic use of white, black, and red - and sharp technique enhance this conceptual struggle. The animals are portrayed with colorful and almost expressionistic intensity. The human figures, instead, are often depicted in black and white, and underscore the allusions to historical events. They are static, as if caught in the frozen frame of a photograph.

The depth of the image generates the chronology; however, the former comes from the potency of the juxtaposition narrative planes, rather than result from the use of perspective. The intensity of the image thus created is further enhanced by the background, which appears to be off-white. Vismeh turns this into an intimate space; on it, she allows the power of her impulses and her immediate emotions to burst freely. The lines extending the figures' gestures are ultimately concealed by the white brushstrokes; nonetheless, something about them remains perceptible. We have an intuition of the movement which resides underneath the whiteness. It is thus that Vismeh gives her spectators insight into the artistic process; she reveals¹ the gestures that progressively spark and inform the painted narrative.

Vismeh's artistic journey finds its roots in the historical events which characterized her country. As she looks back, she calls to memory specific moments: the outburst of war; the bombings; the time when women had to remove their headscarves (the Reza Shah Phalaveli period); and the time when they were obliged to put them back on (after the 1979 revolution).

Thurber's short tale about rabbits, instead, alludes to the events that took place during World War II and, more specifically, the Holocaust. In transforming that story into paintings, Vismeh not only speaks to the wounds and political events in her country, but also becomes a mouthpiece for all the oppressed, across time and space.
___
¹ See, "Art does not reproduce the visible; rather, it makes visible" (Paul Klee).