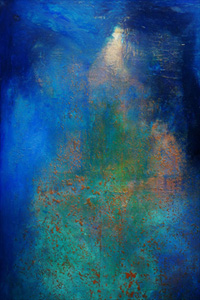 selected works
MAC Maja Arte Contemporanea is delighted to present Margareth Dorigatti's most recent cycle of paintings, a series that revolves around the planets, divinities and myths, with their related metals and colours, and the way these elements invest the days of the week with recondite attributes still perceptible in their names: Moon/Silver (Monday), Mars/Iron (Tuesday), Mercury/Mercury (Wednesday), Jupiter/Zinc (Thursday), Venus/Copper (Friday), Saturn/Lead (Saturday), Sun/Gold (Sunday).

As Karin Dalla Torre points out, "we are immersed in an alchemical kitchen where molten metals bubble in huge crucibles, lending their scientific and aesthetic attributes to the individual deities. Sometimes the surface of the paintings reveals the symbols of the periodic system [...]. Observing these paintings has consequences, regardless of their size, they are so intense as to leave an indelible mark on the viewer's inner world and dreams."

In the exhibition catalogue Flavia Pesci reflects on the way the series "derives from a personal, interior universe, like a sort of cosmological journey in which the system of symbols linking the planets to the gods and their intrinsic myths fills the paintings with connections through affinity and analogy, linking them with specific colours, with the days of the week defined in different languages through their transversal semantic individuality, with vibrations and sonorities. Little wonder that Goethe's famous theory of colours has long been a keystone in Margareth Dorigatti's research and opus."

Each planet, deity, indeed each colour is like a portrait that the artist has conjured up and mixed with feelings and perceptions of her own, thus revealing a highly personal interpretation of the different subjects that we are invited to share. The absolute strength of Mars, for instance, or the seductive beauty of Venus, the confrontational complexity of Saturn, the mysterious delicacy of the Moon or the divine superiority of Jupiter are thus portrayed in the colours and forms that pertain to each one: complementary attributes and analogies that charge every painting with surprising energy and tension, applied with a subtle hint of irony that further enhances the perspicacity of the work.

There is no point in looking for meanings, symbols, metaphors. Words are inopportune when painting tells tales of its own.
- Lidia Reghini di Pontremoli.

MARGARETH DORIGATTI
In 1973, Margareth Dorigatti (Bolzano Italy, 1954) enrolled in the Accademia di Belle Arti of Venice, where she studied with Emilio Vedova.
In 1975, she moved to Berlin to study Painting, Graphics and Photography at the Hochschule der Künste. In 1977, she founded an Atelier that was frequented by eminent artists and theatre people living in Berlin.
In 1979, she was awarded a grant to travel to New York and photograph Lee Strasberg teaching at the Actor's Studio. She began exhibiting her work in private galleries in Berlin in 1980 and, in 1983, with Joachim Szymzcak, took on the enormous project of decorating the Berlin underground network: 75 paintings in eight different stations.
She won the Internationalen Bauausstellung competition for the decoration of the façade of a historic Kreuzberg house.
In 1984 she moved to Rome, where she has continued her work as a painter.
She has exhibited in Italy and abroad in private galleries, public venues and museums (Rome, Paris, Milan, Pescara, Bolzano, Modena, Bologna, Berlin, Nimes, Lyon, Cologne, Bonn, among others). She takes part in collective exhibitions in Italy and abroad.
She is Professor of Decoration at the Accademia di Belle Arti in Rome.
"Dorigatti is an artist of elective affinities. She is more inclined to look for correspondence in the fields of literature and music than in the visual arts, where she has distanced herself from Postmodernism, returning to a sort of classicism in the ethical, structural sense, to questions of form and substance. Her subject matter has thus tended to be the world of myths, gods, saints and demons." [E.C.]