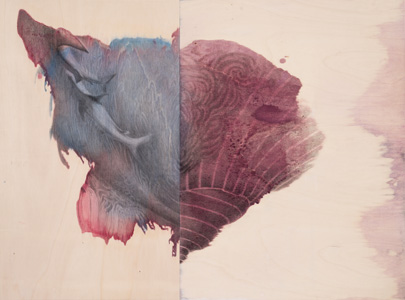 The ten works shown, all diptychs, (oil and charcoal on wood) start off from a color stain, which is then pressed onto another wood panel thus creating the diptych.

Claudio Zambianchi, who wrote the critical text for the exhibition notes: "The color, liquid and fluid, soaks into the wood and reveals the grain, similar to what occurred in Max Ernst's Histoire naturelle, but with a different technique (there we were dealing with frottage). The stain allows the hidden design of the wood to emerge, its complex skin which would otherwise remain mostly submerged. The double mirror image, as in a Rorschach stain, adds an ulterior element of stimulus both visual and imaginative to the mind of the artist.

The preparatory process serves to free the imagination, which can now project onto the stain a world which is both aerial and abyssal, made of sky and deep waters, of Ouranòs and of Thàlassa; and if the celestial part is filled with fantastically shaped clouds, in the aquatic part of the paintings appear gorgons and creatures from the deep, creatures that are more related to mythology than to zoology."

Georgina Spengler was born in Athens, Greece in 1959, where she spent her early childhood. Her family first moved to the United States when she was eight and then to Holland, when she was a teenager. There, amidst Rembrandt, Ruisdael, and Vermeer began her interest in painting and she frequented the Frije Academie of The Hague, taking figure drawing and painting classes.

After finishing school, and with a very romantic vision of painting and art, she set off for Paris where she spent one year and attended the course of César at the Ecole des Beaux Arts.

Seeking a more structured approach to painting she then went to study at the Boston University School of Fine Arts. She eventually completed her academic studies at the Corcoran Gallery and School of Art in Washington D.C.

She has shown continuously over the past 30 years in various group and solo shows, often collaborating with other artists.


Wanting to assimilate the complexity of Italian culture she moved to Rome in 1982. But as of yet not having completely fathomed it, she has remained, and still lives and works in Rome today.