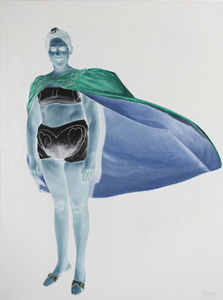 
selected works
MAC Maja Arte Contemporanea is delighted to present a tribute to Diane Arbus on the 95th anniversary of her birth (14 March 1923); the tribute consists in a cycle of previously unseen works by Angelo Titonel in which the artist paints portraits of twenty subjects from the American photographer's famous shots.

The Venetian painter has chosen to retrace and evoke Arbus's potent ability to uncover her subjects' most intimate emotions. To do so, he paints each picture's implicit negative, thus probing into the subject's psychology with greater intensity.

Francesco Faeta writes of the cycle of paintings: "In the heart of Rome and, specifically, within these images, portraiture owns photography by citing and exploring its negative matrix while recreating its proportions freely. In turn, photography appropriates painting by stealing from it its colours and its ability to construct unexpected and inexplicable echoes, dictated exclusively by the painter's palette."

Claudio Strinati adds: "Titonel evokes the idea of the negative as a moral concept, while also turning it into a symbol for photography itself. He thus daringly rethinks the role of painting, seemingly echoing Jim Morrison's sentiment when he defined his own artistic intention as stemming from the desire 'to deliver people from the limited ways in which they see and feel'. Titonel's images become a shadow, a silhouette that - having no depth - pushes its own boundaries, urgently trying to break free of itself. The 'outside' it edges towards does not exist: the image caught by Titonel is an image of the soul, which cannot have physical depth. And, as Titonel himself has said, this is the image he seeks."

Strinati concludes his reflection by noting that "in this cycle, Titonel draws some important consequences from the complexity of his life-long artistic quest. The face-to-face with Arbus, who is here neither extolled nor mocked, allows him to develop a mature reflection on his own work. Arbus becomes a model for him; her images are literally blown up, regaining physical presence and acquiring weight and depth. The physicality thus obtained presses upon the viewer's consciousness. It seems to imply a question: how far does this artist intend to go? Does he think he can venture into life's abyss; that he can allow the image to peek beyond itself while remaining anchored as it is, on the brink of disappearance or anguish? In response, one cannot help but admit that it will not yield; it resists, energetically."

Angelo Titonel (b. 1938, Cornuda, Italy) graduated from the "Castello Sforzesco" School of Applied Arts in Milan. He began working as a graphic designer and art director in international advertising agencies but eventually abandoned this career to devote himself to painting.