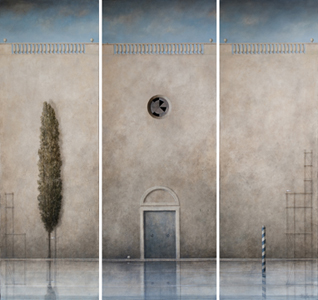 July 10 - September 22, 2018
MAC Maja Arte Contemporanea is proud to present a group exhibition which will run until September 22. The works consist in a series of oil, pencil, and photographic triptychs crafted by seven international and Italian artists. The artists are distant both in style and atmospheres.

An evocative and timeless aura instead emanates from the imaginative Medieval architectures proposed by Ana Kapor; these are characterized by her use of clean lines and magical geometries.

French artist Pierre-Yves Le Duc displays the most imposing artwork in the show: Soap Opera, a work so large it covers an entire wall of the gallery. It portrays a gigantic, Hokusian wave, which completes its life cycle before our helpless eyes.

Aleksandar Dimitrijevic plays with the symbols from "gaming notes" by placing them on small, vibrantly colourful canvases, ultimately legitimising them.

Gianfranco Toso investigates the creation shapes as edging towards the metaphysical dimension of imagination. He explores different geometric shapes in this light, using them as tools in his intangible quest.

Finally, Veronica Della Porta presents the only photographic triptych on display. Here, the close up shots of veins and cuts breaking through slabs of wood come together recalling abstract paintings.

VERONICA DELLA PORTA was born in Modena in 1964. She lives and works in Rome. She is a set and costume designer and she has worked with several artists (among whom Mario Schifano and Isabella Ducrot) before she started her personal projects. Her photographs are predominantly black-and-white digital prints, printed in a single run. Her first solo exhibit at the s.t. Art Gallery in Rome was curated by Ludovico Pratesi in 2013. Since then, she has displayed her photographs in collective exhibitions and fairs (Rome 2012, Affordable Art Fair; Bologna 2015, Set Up Fair; London 2015, Start Art Fair, Saatchi Gallery). In 2017 her second solo show at MAC Art Gallery.

ALEKSANDAR DIMITRIJEVIC was born in Uzice (Serbia) in 1977, where he lives and works today. Dimitrijevic graduated from the Academy of Fine Arts in Novi Sad (Serbia) and completed his postgraduate studies at the same faculty in 2010. His works have been on display in Amsterdam, Hannover, London, Los Angeles, Munich, Rome, Sarajevo, Vienna and in many cities in Serbia where he received numerous awards. His artworks are part of numerous private collections throughout Europe and America, the Museum of Contemporary Art in Vojvodina (Serbia) and the Cultural Center in Belgrade.

ISABELLA DUCROT. Born in Naples in 1931, Isabella Ducrot has been living and working in Rome for many years. In her extensive travels she developed a particular interest in fabrics from countries east of Europe and began studying the many differences in the textile traditions of China, India, Turkey and Central Asia. Over the years she has amassed a collection of rare fabrics of historical interest, and has long used textiles in her own work. She presented a large tapestry at the 1993 Venice Biennale that is today part of the collection of the Contemporary Art Museum of Gibellina, Sicily. In the 1990s she also began using paper, to create a series of large drawings and monotypes in black and white. In 2002 she created a series of paper tapestries entitled "Memorie di una terra", from memories of a trip to Afghanistan, which were exhibited at the Milan State Archives. A large collage (4x4m) of fabric, paper and paint was exhibited and acquired by the Galleria d'Arte Moderna in Rome, while a large pastel on silk is part of the collection of Rome's National Gallery of Modern Art (GNAM). In 2005 she created two mosaics for the Piazza Vanvitelli metro station in Naples. In 2008, she had an individual exhibit at GNAM entitled "Variazioni". In 2011, she was invited to exhibit her work at Venice Biennale, Italian Pavilion. In 2014, GNAM featured another individual exhibition of hers: "Bende sacre". In the same year solo show at Galleryske (New Delhi) and participation to Art Basel fair. In 2015, she is invited by Achille Bonito Oliva to exhibit her installation "Effimero" at Archaeological Museum in Naples. Isabella Ducrot has shown her work in Rome, Milan, Paris, Berlin, New York and New Delhi. She has created backdrops for the theatre, concerts and the ballet (Rome Philharmonic, Lecce 'Balletto del Sud', Rome 'Olimpico' Theatre and 'Palladium' Theatre).

ANA KAPOR was born in Belgrade, Serbia, in 1964. She obtained her degree from the Academy of the Fine Arts in Rome in 1987. Her art reflects a metaphysical world seen through the lenses of ideal architecture. Kapor is also inspired by Mediterranean landscapes, which she inserts with peculiarity in her fantastic visions. She has participated in numerous collective and solo-exhibitions in Italy as well as abroad. In 2008, Kapor and her husband Vladimir Pajevic were invited to be the protagonists in an anthological exhibition organized by the Bad Frankenhausen Museum in Germany. Several of her works have been selected to be part of the latest exhibitions of the Venice Biennale, Italian Pavilion, Sala Nervi, Turin. In 2014 Kapor won the Michetti Prize and the painting became part of the permanent collection of the Museum. The same year she won the Silver Plate of Sulmona Prize as well as the third prize at the International Biennial of Watercolor in Belgrade. In 2016 she became part of the Fabbri Collection.

PIERRE-YVES LE DUC was born in France in 1964. In 1988 he graduated in Italian literature at the Sorbonne. During his studies he took frequent trips to Italy until, having obtained a grant from university, he decided to move to Naples. He created his first works in 1989. Le Duc's artistic quest is mainly based on creating site-specific monumental installations consisting of cycles of complex and well-organised works with a strong focus on project. Among other things he has exhibited in Naples are the interactive public artwork 'Il Cenacolo' (The Last Supper) which he displayed around the obelisk of Piazza San Domenico Maggiore in 1994; 'Le nove muse e i nove poeti' (The nine muses and the nine poets), conceived for the semicircle of Piazza Plebiscito in 1995; 'I Quaranta Ladroni' (The forty thieves), displayed in the Naples Underground (Napoli Sotterranea) in 1996; 'Medium', exposed in the Sala of Lazzaretto in 1998; 'GU', exhibited at the National Archaeological Museum in 2004; 'Soap Opera', which portrays the cycle of water and life; and other works such as 'Erotoritratti', 'Osso-Buco', 'Bonificarsi, please !' and 'Rosarno, desperate house-lives'. In 2012 he moved to France, but keeps being creative at his Atelier in Naples. Le Duc has exhibited in Italy and abroad (a one-man show of his work was held in Atlanta, United States in 2012). He has been present in important fairs such as the Art Basel fair, the Miami Art Fair and Artissima (Italy).

ANGELO TITONEL was born in Italy in 1938. He graduated from the "Castello Sforzesco" School of Applied Arts in Milan. He began working as a graphic designer and art director in international advertising agencies but eventually abandoned this career to devote himself to painting. His first exhibit came in 1964, in Velbert (Essen), Germany. He later moved to Rome where, during the 1970s, he was recognized as one of the leading figures of Italian Magic Realism. Titonel's numerous exhibitions include shows at the Museo Civico of Bologna (Italy, 1973), the Museum of Contemporary Art of Skopje (Macedonia, 1974), the European Parliament in Strasbourg (France, 1994), the Complesso del Vittoriano in Rome (2001), the Lausanne Olympic Museum (Switzerland, 2005) and the Palazzo Pubblico Antichi Magazzini del Sale in Siena (Italy, 2010). Besides having many other solo exhibits throughout Europe and the United States over the years, he has also been invited to several international biennial and quadrennial events and has been bestowed with diverse awards and rave reviews. His many prestigious commissions include the Quirinal Palace (the official residence of the President of the Italian Republic), for which he has painted portraits of presidents and key historical characters, including Giuseppe Garibaldi, Giuseppe Mazzini, Massimo D'Azeglio and the Count of Cavour. He was also commissioned by the Vatican to paint the official portrait of then Pope Benedict XVI. Upon request from the Uffizi Gallery in Florence, he created a self-portrait for the Gallery's collection entitled "Artist Self-Portraits".

GIANFRANCO TOSO was born in Rome in 1980, where he continues to live and work. He studied architecture and worked as an architect for a decade; as he did so, he also began to use drawing and painting to investigate the specific nature of shapes. His interest in the theories and profound implications of the creation of volumes in space, has brought him to abandon the practice of working on architectural projects and to investigate a more metaphysical approach to shapes. He uses geometry to imagine a higher dimension with respect to the one experienced through our senses. His work has been on display at the Istituto Centrale per la Grafica (Rome 2010, 2012), the CIAC Museum (Genazzano, Italy, 2013), the Rhode Island School of Design (Rome 2016) and MAC Art Gallery (Rome 2017).