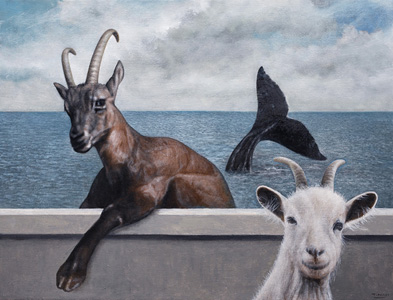 
selected works
MAC Maja Arte Contemporanea will celebrate its fifth anniversary on Tuesday December 4, with the opening of Zodiac, a new collective exhibition.

The show is intended as the first of an annual series hosting collections thematically inspired by the zodiac and the constellations. The curator, Daina Maja Titonel has invited twelve very different artists to explore their star sign through their work, thus bringing together a wide range of nationalities, experience, and media to create a complex representation of the Zodiac.

Among the twelve works on display - mainly paintings - one will find Gaetano Zampogna (Scido 1946) and Margareth Dorigatti's (Bolzano 1954) Aries and Taurus respectively, which were completed specifically for this exhibit. Lino Frongia (Montecchio 1958) instead chose two paintings from 1985, entitled Prodigio (Portent) to represent Gemini. In the works, two subjects similar in nature (two trees and two apples) underscore the subtle undoing of identity that the act of painting entails, while, paradoxically, reforming the imperceptible singularity of each individual subject.

The only photograph on display is Pierpaolo Lista's (Salerno 1977) representation of Leo. The image, entitled Re (King), was completed by creating an alternate reality in studio, with a single emblematic object at its core. The artificial space thus elicits a reflection on the symbiosis between space and reality, letting the image define authenticity on its own terms.

Bruno Ceccobelli (Montecastello di Vibio 1952) selected Teodora (1998-2015, acrylic and collage on canvas) to portray Virgo. "In her courage to embrace a second life, the virgin becomes a symbol of innocence; the innocence that Art always needs," he says of his work.

Among the new voices at the gallery, Francesco Bancheri (Rome 1978) offers a fragment of a galaxy containing the constellation of Libra (Galassia box – Libra - Boxed Galaxy - Libra - collage on enamelled canvas in plexibox); Carlo Alberto Rastelli (Parma 1986) sets his Scorpio in a wooded landscape, where geometric abstractions and figures entwine in a stratified game; while Maltese artist Karine Rougier (Malta 1982) portrays Aquarius through the oniric and symbolic style which is characteristic of her work.

The centaur Sagittarius is painted by Venezuelan artist Rodolfo Villaplana.

Angelo Titonel (Cornuda 1938 - Imola 2018), to whom the show is dedicated by his daughter Daina Maja, founder of MAC Maja Arte Contemporanea, brings to the collective his final canvas, Capricorn. In a magical, dreamy atmosphere two capricorns - the star sign of both father and daughter - surface. The layered symbolism emerging from the interaction between an ancestral landscape and the primary visual plane on which the animals are found is evocative of the movement from birth to life, among other things.