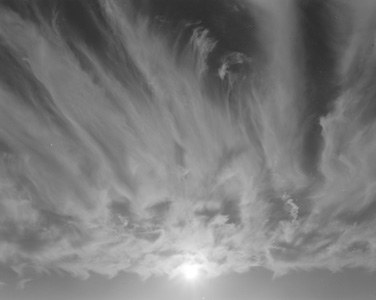 A personal exhibition by Italian photographer Andrea Calabresi that includes fifteen selected black-and-white photographs from the projects Close Landscapes and The Upper Half. Both are long-term projects that focus on landscapes, the Moon, and the Sun, where analog photography is used to obtain the greatest expressive richness of the images.

Six of the images on display come from the project Close Landscapes (2001-2009); these are vintage gelatin silver prints on baryta paper (60 by 120 cm) - and are printed by Calabresi himself. The photographs' linear composition (featuring two horizontal sections: earth/sky) and the precise choices made to champion the natural lighting urge the viewer to enter an intimate contemplative state. The skin seems to prickle, as if coming into contact in turn with the cold or the heat, with the humidity of the air or the dryness of the land.

The series was first displayed in Fall 2006 at MV Gallery in Tribeca, New York, and was displayed again the following year in Rome. In the latter occasion, a gorgeous book was also printed. In its preface, Arno Rafael Minkkinen speaks of the images stating: "He reserves one eye for the perpetual presence of the sky, the other for the palpable surface of the earth. Yet no hierarchy is presented or intended. Instead, the pictures seem to suggest that what happens in the sky and what happens on land is of equal fascination for him. [...] The images speak of natural occurrence and the collaborative harmonies and disharmonies between our grounded body and our floating mind. [...] They engage the eternal drama of our desire to bring heaven down to earth and raise the ground of our being into the sanctity of the infinite."

"The project takes root in two literary sources" - says Calabresi about his own work - "the first few lines of Leopardi's L'infinito and the concept of plausibility as defined by Alessandro Manzoni. The aim of my work, done through the use of a highly specialized technique, is to reduce the artificial components in an image, to eliminate aesthetic emphasis, and thus free photography from the influence of its pictorial roots. My aim is always to reveal the object in its essence, lifting from it all superfluous elements. My landscapes are thus the opposite of 'views'; they deny the very possibility of views (as is the case with the famous Leopardi's hedge). I work by subtraction. It is this that moves the viewer's attention from the subject to its representation, thus gifting an evocative power to the images and allowing the lighting and the tonal nuances and shifts to be the dominating expressive force."

Following the success of the 2014 exhibition Moon, MAC Maja Arte Contemporanea has also chosen to display images from the series Sun, the second chapter in the project The Upper Half (2006-2018). The eight images are gelatin silver prints on baryta paper (50 by 50 cm). There is a single image printed using a pigment print in a large size (150 by 190 cm); this is also a single edition.

In The Upper Half Andrea Calabresi celebrates the two primary light source - the Sun and the Moon. The project is a study on the very limits of visibility; the first protagonist being the most potent light source, the second pallidly reflecting the luminosity of the first onto earth.

In the skies captured by daylight with the Sun overbearingly illuminating the spectacular randomness of atmospheric events, Calabresi seeks to blend a child's innocent glance with the complexity of adult observation.

Using complex techniques aimed at being invisible so as to reproduce the naturalness of the human vision, Calabresi seeks for a perceptive realism of the image, refusing any temptation to give it a pictorial imprint. He thus leaves tonal elements and the perspective unadulterated, continuing with the artistic intention that characterized Close Landscapes.

Andrea Calabresi was born in Rome in 1967. He started shooting photographs and working in the dark room as a young boy. Self-taught at first, he then studied under the guidance of James Megargee and Arno Rafael Minkkinen.

He has worked as a professional photographer since 1990, experimenting in different fields, most notably architectural photography. In 1996, he opened a black-and-white fine art printing laboratory; he also began focusing his energy on perfecting his technical studies; on his artistic projects; on critical and historical research; and on his work as a teacher. He still teaches courses at Corsi Foto Analogica, Spazio Labò, at the Toscana Photographic Workshops (TPW) since 2003, and at Syracuse University (New York) where he has been a visiting professor since 2004.