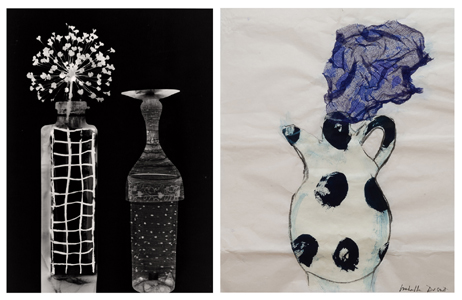 MAC Maja Arte Contemporanea is delighted to host the double personal exhibition including works by Isabella Ducrot and Claire de Virieu. Patrizia Cavalli has dedicated an unseen poem to the Show.

The works by both artists are all recent; together they form a visual dialogue, an interlacing of the images caught through de Virieu's creative use of photo techniques in the darkroom with those captured by Ducrot's savvy manipulation of pigments on paper.

The dialogue is not intimate; rather, it dynamically transforms the gallery into a theatre where the pictures become veritable narratives that beckon across the space finding consonances in one another. The works of the two artists connect through shared themes - the vases and the still lives - that surprise viewers in their dissonant dynamism. The dialogue is constructed in counterpoints, with specular themes chasing at each other incessantly.

Ducrot's vases are irreverent for the viewer: the objects disrupt an apparently ephemeral space; the latter is a place 'out of place', one without distinctive markers, other than the occasional chequered table cloth or the waves. "Their raison d'être is reliant upon their beauty. There is nothing natural about them; they are mere artifice. The artist portraying the vases must have seen 'life' spring from them in their pleasing shapes; for this reason, they were painted or photographed." (Isabella Ducrot)

The haughtiness of their solitary beauty at times falters; it surrenders to the breadth of space they contain, as they are, after all, but containers. Their inside rebels, evaporating and defying form - the rotundity it ought to belong to - and vanishing in new, unexpected shapes.

De Virieu's photogrammes restrict the absolute beauty of the vases portrayed; they urge the glance away from the surface and towards what lies beyond visible shapes. They seem to want to break free of space and time, lying in between container and content, between what seems (phenomena) and what is. They thus straddle the line between from and substance by playing with light and shadow, dark and whiteness, the visible and desire, ultimately, allowing these to bleed together.

De Virieu's vases, whose content has not dissolved but rather lingers on, are imbued with all the prowess of an unexpected vitality. She says of her work, "In the darkroom, without camera or film, the photographer can directly shape matter: choosing how to create by playing with light and shadow, shaping their dialogue, their struggle, and thus generating an image. The photographer's hands act on translucent objects placed on a sensitive surface; without specific contours, the image has to yield and echo the photographer's desire." (Claire de Virieu)


ISABELLA DUCROT
Born in Naples in 1931, Isabella Ducrot has been living and working in Rome for many years. In her extensive travels she developed a particular interest in fabrics from countries east of Europe and began studying the many differences in the textile traditions of China, India, Turkey and Central Asia. Over the years she has amassed a collection of rare fabrics of historical interest, and has long used textiles in her own work. In 1989, she created 12 paintings made up of panels that incorporated fragments of an Andean fabric dating back one thousand years. She subsequently spent two years creating a rich series of tapestries around a recurring motif in Ottoman culture, the cintamani pattern. She presented a large tapestry at the 1993 Venice Biennale that is today part of the collection of the Contemporary Art Museum of Gibellina, Sicily. In the 1990s she also began using paper, to create a series of large drawings and monotypes in black and white. In 2002 she created a series of paper tapestries entitled Memorie di una terra, from memories of a trip to Afghanistan, which were exhibited at the Milan State Archives. A large collage (4x4m) of fabric, paper and paint was exhibited and acquired by the Galleria d'Arte Moderna in Rome, while a large pastel on silk is part of the collection of Rome's National Gallery of Modern Art (GNAM). In 2005 she created two mosaics for the Piazza Vanvitelli metro station in Naples. In 2008, she had an individual exhibit at GNAM entitled Variazioni. In 2011, she was invited to exhibit her work at Venice Biennale, Italian Pavilion. In 2014, GNAM featured another individual exhibition of hers: Bende sacre. In the same year Solo Show at Galleryske (New Delhi) and participation to Art Basel fair. In 2015, she is invited by Achille Bonito Oliva to exhibit her installation Effimero at Archaeological Museum in Naples. In 2019, she took part in Art Basel, Frieze and FIAC with the Galerie Gisela Capitain; she also had two personal exhibitions: one in Cologne (Galerie Gisela Capitain) and one in Berlin (Capitain Petzel). She created backdrops for the theatre, concerts and the ballet (Rome Philharmonic, Lecce 'Balletto del Sud', Rome 'Olimpico' Theatre and 'Palladium' Theatre). She published: La stoffa a quadri (2018, ed. Quodlibet), Fallaste Corazón (2012, ed. Il notes magico), Suonno (2012, ed. La Conchiglia), Text on Textile (2008, ed. Nottetempo).


CLAIRE DE VIRIEU
Claire de Virieu (Paris, 1948) lives and works between Rome and Paris. She most loves to photograph nature and landscapes. She has published several books with Pierre Bergé, Marc Augé, Hubert de Givenchy, etc. Over the past twenty years, these works have been on display in several art shows. More recently, she has rekindled her passion for black and white photography, creating imaginary landscapes inspired by Japanese culture as well as a series of abstract images. In 2017 and 2019 she displayed the latter at the Pierre-Alain Challier gallery in Paris and she took part in the Festival Kyotographie in Kyoto. A portfolio entitled Nara containing her most recent works has just been released by Éditions La Falaise. Today, Claire de Virieu has returned to her darkroom in Borgogne to work on her shots materially, without camera or film. The flowers and leaves she uses all come from her personal garden which is both her greatest passion and the source of her inspiration.