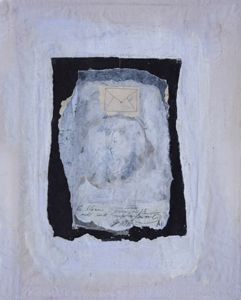 On the heel of Anna Di Paola's successful debut show, Maja Arte Contemporanea is proud to host its second exhibition for the year 2020-2021, a collective entitled '3D' which showcases fifteen works by Isabella Ducrot, Margareth Dorigatti and Claire de Virieu. The three artists are displayed together for the very first time, cementing the gallery's decision to dedicate the year entirely to female artists.

Isabella Ducrot brings to '3D' a series of images on paper entitled "Interno giorno," as well as one work, "Benda originale", which was part of her personal exhibit Isabella Ducrot. Bende Sacre held at the National Gallery for Modern Art in Rome in 2014. The fabric used in the latter work is a Tibetan votive scarf (katha); the translucent, ephemeral material has been reworked almost to the point of undoing, defying the silk's natural delicacy.

Margareth Dorigatti displays here an epistolary exchange (approximately 1.700 letters) between Goethe and his beloved Charlotte von Stein. Upon their love story's end, Charlotte requested to have all her letters returned to her and, subsequently, destroyed them. Dorigatti uncovers those secret words by imagining the letters and then reinterpreting them pictorially.

Finally, the series "Photogrammes" by Claire de Virieu comes to life in the darkroom where, in the absence of both camera and film, the French artist reshapes matter through an interplay of shadows and light, acting directly on the luminescent transparence of the objects placed on the surface.

ISABELLA DUCROT (Naples, 1931) has been living and working in Rome for many years. In her extensive travels she developed a particular interest in fabrics from countries east of Europe and began studying the many differences in the textile traditions of China, India, Turkey and Central Asia. Over the years she has amassed a collection of rare fabrics of historical interest, and has long used textiles in her own work. In 1989, she created 12 paintings made up of panels that incorporated fragments of an Andean fabric dating back one thousand years. She subsequently spent two years creating a rich series of tapestries around a recurring motif in Ottoman culture, the cintamani pattern. She presented a large tapestry at the 1993 Venice Biennale that is today part of the collection of the Contemporary Art Museum of Gibellina, Sicily. In the 1990s she also began using paper, to create a series of large drawings and monotypes in black and white. In 2002 she created a series of paper tapestries entitled "Memorie di una terra", from memories of a trip to Afghanistan, which were exhibited at the Milan State Archives. A large collage (4x4m) of fabric, paper and paint was exhibited and acquired by the Galleria d'Arte Moderna in Rome, while a large pastel on silk is part of the collection of Rome's National Gallery of Modern Art (GNAM). In 2005 she created two mosaics for the Piazza Vanvitelli metro station in Naples. In 2008, she had an individual exhibit at GNAM entitled "Variazioni" and published Text on Textile (first in English, then later in a slightly different form in Italian as La matassa primordiale). In 2011, she was invited to exhibit her work at Venice Biennale, Italian Pavilion. In 2014, GNAM featured another individual exhibition of hers: "Bende sacre". In the same year solo show at Galleryske (New Delhi) and participation to Art Basel fair. In 2015, she is invited by Achille Bonito Oliva to exhibit her installation "Effimero" at Archaeological Museum in Naples. In 2019, she took part in Art Basel, Frieze and FIAC with the Galerie Gisela Capitain; she also had two personal exhibitions: one in Cologne (Galerie Gisela Capitain) and one in Berlin (Capitain Petzel). Isabella Ducrot has shown her work in Rome, Milan, Naples, Palermo, Paris, Cologne, Berlin, Geneva, Madrid, Stockholm, New York and New Delhi. She has created backdrops for the theatre, concerts and the ballet (Rome Philharmonic, Lecce 'Balletto del Sud', Rome 'Olimpico' Theatre and 'Palladium' Theatre). Critical essays on her work have been published by Ritanna Armeni, Ginevra Bompiani, Giovanna Bonasegale, Achille Bonito Oliva, Patrizia Cavalli, Marcella Cossu, Federica Di Castro, Laura Cherubini, Erri De Luca, John Eskenazi, Ruggero Guarini, Diane Kelder, Raffaele La Capria, Bruno Mantura, Maria Vittoria Marini Clarelli, Sandra Pinto, Massimiliano Alessandro Polichetti, Silvia Ronchey, Lucetta Scaraffia, Nadia Tazi, Luciano Trina, Tommaso Trini and Stefano Velotti.
She published: La stoffa a quadri (2018, ed. Quodlibet), Fallaste Corazón (2012, ed. Il notes magico), Suonno (2012, ed. La Conchiglia), Text on Textile (2008, ed. Nottetempo).

MARGARETH DORIGATTI (Bolzano, 1954) lives and works in Rome. In 1973 she took a Diploma at the Academy of Fine Arts in Venice, studying with Emilio Vedova. In 1975 she moved to Berlin, where she studied for a degree in Painting, Graphic Design and Photography at the Universität der Künste. In 1977 she founded an Atelier frequented by the foremost artists and theatre people in Berlin. In 1983, along with Joachim Szymczak, she completed a major art cycle for the Berlin underground network: 75 paintings installed in eight different stations. She won the Internationalen Bauausstellung competition for the creation of a facade for a historic building in the Kreuzberg district. In 1983, following her Degree in Visual Communication, she moved to Rome, where she began her on-going career as a painter. She shows in Italy and abroad in private galleries and public venues and museums (Rome, Paris, Milan, Pescara, Bolzano, Modena, Bologna, Berlin, Nimes, Lyon, Cologne, Bonn, etc.). She has been invited to take part in numerous international Biennial and Triennial shows, including the Venice Biennale. She has taught at the Universität der Künste in Berlin, at the Academy of Fine Arts in Bologna, at the Akademie der Künste in Munich and at the Free University of Bolzano. She is full professor of Decoration at the Academy of Fine Arts in Rome.

CLAIRE DE VIRIEU (Paris, 1948) lives and works between Rome and Paris. She most loves to photograph nature and landscapes. She has published several books with Pierre Bergé, Marc Augé, Hubert de Givenchy, etc. Over the past twenty years, these works have been on display in several art shows. More recently, she has rekindled her passion for black and white photography, creating imaginary landscapes inspired by Japanese culture as well as a series of abstract images. In 2017 and 2019 she displayed the latter at the Pierre-Alain Challier gallery in Paris and she took part in the Festival Kyotographie in Kyoto. A portfolio entitled "Nara" containing her most recent works has just been released by Éditions La Falaise. Today, Claire de Virieu has returned to her darkroom in Borgogne to work on her shots materially, without camera or film. The flowers and leaves she uses all come from her personal garden which is both her greatest passion and the source of her inspiration.