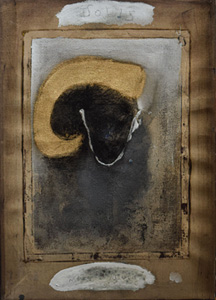 SIGNA SUNT is part of a cycle of shows on subjects relating to the world of Astrology organized every year by gallery owner Daina Maja Titonel.

While in her previous exhibitions Luna/Mond (2016) and DEI Colori/Giorni (2018), Dorigatti focused on the planets and the colours associated with the days of the week, the paintings in "SIGNA SUNT" reflect her interest in the twelve Zodiac signs.

The show is an opportunity for delving deep into the relationship between perceptual space, the vibrations of matter and the resulting energy that is produced by their interaction. From early times to the present, these elements have shaped the way we think, and Dorigatti's works embody a pulsating reflection of the beauty that derives from the combination of cultural, chemical and psychological elements in our imaginational relationship with the individual signs of the Zodiac. They are paintings that interact with the observer, transcending elemental weights and frequencies, and quietly acting upon our own perceptions.

"In his Theory of Colours Goethe expresses deep opposition to the purely scientific take on perception, and my work is in line with this interpretation of individualism", the artist explains. "I start out from direct observation, where I find inspiration, in this case in the planets, but above all in Rome, where I live. As I walk around I look at the sky, the ground, the buildings and nature, which are all omnipresent among the people. I learn a lot by taking public transport, and this knowledge, along with two thousand seven hundred years of history, manifests itself in subtle ways in my paintings. Yet as an artist I am also drawn by the labyrinth of mysticism and fantasy, which are an integral part of human experience, shaped as it is by different energies, some of them as mysterious as the stars. We also tend to associate colours and their characteristics with the four elements of earth, water, fire and air, perceptible not only through sight. My studies of Chromatology have taught me that colours not only have specific frequencies and weights, but also that they can act to various degrees on the mood and health of those who perceive them. Over time I found that the signs of the Zodiac and their symbols could actually attract or repulse the colours that I had assumed pertained to them. I believe one's true birthplace is where one first gazes and dreams: in my case, the stars."

Born in Bolzano in 1954, in 1973 she took a Diploma at the Academy of Fine Arts in Venice, studying with Emilio Vedova. In 1975 she moved to Berlin, where she studied for a degree in Painting, Graphic Design and Photography at the Universität der Künste. In 1977 she founded an Atelier frequented by the foremost artists and theatre people in Berlin. In 1983, along with Joachim Szymczak, she completed a major art cycle for the Berlin underground network: 75 paintings installed in eight different stations. She won the Internationalen Bauausstellung competition for the creation of a facade for a historic building in the Kreuzberg district.

In 1983, following her Degree in Visual Communication, she moved to Rome, where she began her on-going career as a painter.

She shows in Italy and abroad in private galleries and public venues and museums (Rome, Paris, Milan, Pescara, Bolzano, Modena, Bologna, Berlin, Nimes, Lyon, Cologne, Bonn, etc.). She has been invited to take part in numerous international Biennial and Triennial shows, including the Venice Biennale.