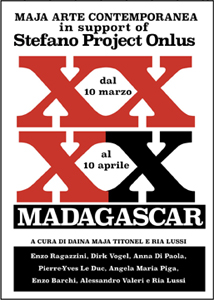 This collective was born in cooperation with artist Ria Lussi and is designed to support the "Stefano Project Onlus," a project started in 1987 by Stefano Palazzi in the small island of Nosy Komba, North Madagascar.

Covid-19 has made the urgent need to "care for one another and for all creation" — as stated by Pope Francis in the Encyclical Laudato Si' — more pressing than ever.

In response to this need, Daina Maja Titonel and Ria Lussi joined forces and decided to display a collection of erotically-inspired pieces intended to awaken all viewers from the folds of a winter slumber.

All the proceeds from the sales will be divulged to the non-profit organization "Stefano Project Onlus". The organization has been working in Madagascar for over thirty years; its extraordinary contributions are documented here: www.weworkitworks.org.