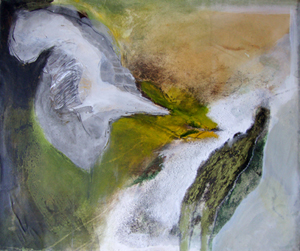 
selected works
The exhibition is a selection of twenty paintings by the artist Margareth Dorigatti inspired by the ballad Erlkönig (The Elf-King), written by Johann Wolfgang von Goethe in 1782 as part of a Singspiel, Die Fischerin ("The Fisherwoman").

"The ballad is one of the most famous poems in the German-speaking world. [...] From the point of view of form and content, it appears to be clear and easy to follow, yet when it comes to interpretation, it is much more complex, suggesting a wide range of possible readings.
Margareth Dorigatti's interpretation is a revelation, fluctuating between tension, disintegration and the shaping of form.
Art is not a refuge. Art is a struggle. With oneself. With materials and matter. With truth. Whoever approaches Margareth Dorigatti's paintings should be warned: you look at your own risk. These paintings provide no mediation, no safe distance. They are works that conjure up without narrating, they don't describe reality but take its place, becoming another reality that is both imaginary and experienced at a profound level. [...]
These overlapping images embody a process that suggests ritual and initiation. Starting out from dissolution, from the abandonment of the self, from absorption into another world, initiation begins, undergoing various stages of purification before knowledge can be achieved. Such is the process of the dissolution of form, and its successive new embodiment. Such is the experience of taking - and making - shape.
Dorigatti's works are ineluctable. They bewitch whoever observes them. They are like rocks hewn by time, yet unchanging, massive, intensely powerful, and at the same time coldly ethereal and unfathomable. Conjunctions that separate us from the abyss. The enticement is irresistible, and the attraction fatal. This is the voice of the Elf-King. The precipice. An invitation to probe the depths of the subconscious, in apparent free-fall. The artist is aware of the risk, because she perceives release, not only her own. In this fall there is deliverance, in the shape of knowledge. [...]
The Ballad is a paradigmatic example of the expressive power of what is left unsaid. Yet the unspeakable is clearly there, in all its immeasurable extension. Such is Dorigatti's painting, at the same time both abstract and figurative, material and spiritual, aerial and full of gravity. Deeply lived and developed with scientific, alchemical rigour."

MARGARETH DORIGATTI
In 1973, Margareth Dorigatti (Bolzano Italy, 1954) enrolled in the Accademia di Belle Arti of Venice, where she studied with Emilio Vedova.
In 1975, she moved to Berlin to study Painting, Graphics and Photography at the Hochschule der Künste. In 1977, she founded an Atelier that was frequented by eminent artists and theatre people living in Berlin.
In 1979, she was awarded a grant to travel to New York and photograph Lee Strasberg teaching at the Actor's Studio. She began exhibiting her work in private galleries in Berlin in 1980 and, in 1983, with Joachim Szymzcak, took on the enormous project of decorating the Berlin underground network: 75 paintings in eight different stations.
She won the Internationalen Bauausstellung competition for the decoration of the façade of a historic Kreuzberg house.
In 1984 she moved to Rome, where she has continued her work as a painter.
She has exhibited in Italy and abroad in private galleries, public venues and museums (Rome, Paris, Milan, Pescara, Bolzano, Modena, Bologna, Berlin, Nimes, Lyon, Cologne, Bonn, among others). She takes part in collective exhibitions in Italy and abroad.
She is Professor of Decoration at the Accademia di Belle Arti in Rome.
"Dorigatti is an artist of elective affinities. She is more inclined to look for correspondence in the fields of literature and music than in the visual arts, where she has distanced herself from Postmodernism, returning to a sort of classicism in the ethical, structural sense, to questions of form and substance. Her subject matter has thus tended to be the world of myths, gods, saints and demons." [Eva Clausen]