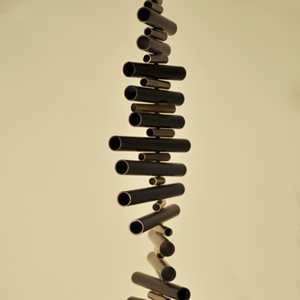 
selected works
The exhibition comprises fifteen works, different materials and techniques on paper and sculpture (wood, aluminum, brass, plastic, wax, etc), as well as one acoustic installation.
Voice and sound are a recurrent theme in Thüngen's work, and here they play an even more central role.
The voice, just like fingerprints or the eye's iris, defines us as unique individuals. The spoken word often captures the fleeting moment we call 'performance', only persisting in our memories.
The unison of sound and sculpture in defining one's dimension of time and space has inspired Janine von Thüngen's newest pieces, centered around the multifaceted pronunciation of the word 'mother'.
MAMA represents the universal emotional connection that we all share with our mothers.
MAMA as the mother of all relationships.

JANINE VON THÜNGEN
Janine von Thüngen was born in Munich (Germany) in 1964 and has lived in Rome since 2000.
She studied with the sculptor Nicolai Tregor in Bavaria and later worked with Karl Lagerfeld.
She spent ten years as a costume and set designer for opera, participating in more than 25 productions throughout Europe.
In the late 90's, while living in New York, she had her own studio and started the 'New York Project' in 1997. She would walk around Manhattan modelling clay portraits of street walkers, later cast in 100 bronze statues. They were recently exhibited in the BABEL at the Botannique Royal of Belgium (2013) and before at the Palais des Beaux Arts Lille (France) in 2012.
In 2011 she exhibited one of her major works at the Torino pavilion of the Venice Biennale, one of the many shows held in Italy (including in Rome, Bologna, Turin, etc.) and abroad (in Miami, New York, Bruxelles, Linden, Paris, Berlin, among other cities).
Janine has also contributed extensively to both private and public collections, including the Museum Centro Arte Contemporanea Cavalese, the Schloss Ziethen public park (Germany), the Hamburg garden park, the Bambin Gesù pediatric hospital in Rome, and many more.