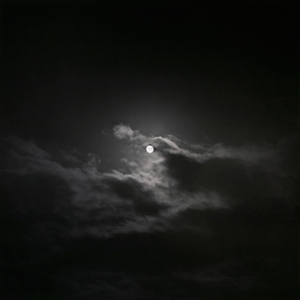 
selected works
A selection of seventeen images from Andrea Calabresi's new project: The Upper Half.
Andrea Calabresi has always worked on long term projects in which the analogue photo technique is carefully used to empower the expressiveness of the images. In his last project, The Upper Half, the artist pays homage to the light sources mankind has always seen, the Sun and the Moon; moon which is the subject of this exhibition.
In his big night skies, where the Moon softly lightens the spectacular randomness of the atmospheric events, Andrea Calabresi seeks the fusion between the purity of a juvenile vision and the complexity of the adult one. The Moon stands there, right in the centre of the frame, like a child attempting to draw it will put it, free from any concern about aesthetics or composition.
At the same time The Upper Half is an exploration of the limits of the visibility: the most powerful light source known and his pale reflection projected on the earth by its satellite. Sun and Moon are almost infeasible images.
The author uses a very complex technique, but he hides it to be able to mimic the simple naturalness of the human vision. In his Moons Calabresi pursues a perceptive realism and rejects any pictorial or spectacular effects.
The images shown are analogue silver gelatin prints made by the author on fibre base paper following archival standards, seven of mural size (50x50'' - 122x122 cm) and ten of medium size (19x19'' - 47x47 cm).

ANDREA CALABRESI
Andrea Calabresi was born in Rome in 1967.
He began taking pictures and printing when he was a boy. Initially self-taught, he later studied with James Megargee and Arno Rafael Minkkinen.
Professional photographer from 1990 to 1998, he worked in many fields, but mainly in architecture photography.
In 1996, he opened in Rome a fine art black & white printing lab, this allowed him to gradually quit the professional photography activity. Since then, he devoted himself to the study of the technique and the development of the Perceptive Method, to art projects, intense theoretical and historical studies and to the teaching activity. He is visiting professor at the Syracuse University and teaches at Corsi Foto Analogica and at the Toscana Photographic Workshops.
His personal works consists of long-term projects, such as the cityscapes of Questions About the Meaning of Space (1995-2002) and Close Landscapes (2001-2008).

SKY BOX: DIRECTIONAL PATHS IN THE WORK OF ANDREA CALABRESI
by Arno Rafael Minkkinen
When Alfred Stieglitz pointed his camera skyward in his series of Equivalents it was not just to demonstrate his ability to photograph what was freely given to everyone, that his privileged connections somehow gave him the edge on great images. We need to dig deeper. A far more compelling reason was located in personal angst, prompted by the death of his mother. Asking why, digging deeper, allows us to discover connections that advance one body of work to another or connections between parallel works. Thus seen the Equivalents can be viewed as part of Stieglitz' tenderly erotic work with Georgia O'Keeffe, becoming a kind of two-lane highway-upward to the sky and inward to the soul.
Simple measures have a way of creating profound phenomena. Andreas Calabresi's enduring fascination with the earthbound cosmos continues in Un-equivalents [Monn series], a series of sky photographs in homage, yes, but with a haunting twist. Being a true artist - who knows all art is but an extension of what has been done before - Calabresi also knows he must layer in something wholly original as his part of the bargain. In the way that Hiroshi Sugimoto recently extended his sea series by shooting long exposure moonscape trajectories over the oceans and turning the images on their side to place the viewer, as he explains them, into outer space, Calabresi packages his night skies inside box frames to create the impression, not of looking up, but peering deep down into a hole. On the precipice of Bright Angel Point in the Grand Canyon you get the same sensation. Stare up at the stars in the night sky long enough and pretty soon they appear as if they are below you, like soccer players seen from stadium skyboxes, shooting stars in their field of green.
Given the square format of Calabresi's new work, we can see a clear bridge to his earlier, long horizontal landscapes published in his first monograph, Close Landscapes I. In that book I summarized what for me was his goal, namely
to bring heaven down to earth and raise the ground of our being into the sanctity of the infinite.
Whereas land and sky became "reality and reverie" in earlier work, boxing in the sky in the new work is equivalent to burying the infinite, deep into a hole in the earth. The optimist view of the east west horizons as representing a connection to the infinite through an untouchable horizon becomes here a sombre metaphor for dealing with death in the square images. They are like tomb plates at the cemetery, templates of the last visions of dead men on earth. I become that hole in the ground looking up and not soon after, looking down as if I was already in heaven. This impression addresses for me, and for those who might agree, the vital, essential question of why. The works are the flip sides of the same coin, life and death in a continuity of vision that is the hallmark of the best artists among us.