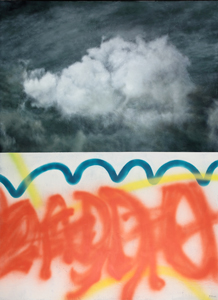 
selected works
On Thursday, November 27 2014, MAC Maja Arte Contemporanea inaugurated the solo exhibition of painter Angelo Titonel, who returns to exhibit in Rome for the first time since his 2001 retrospective at the Complesso del Vittoriano.

A leading figure of Italian Magic Realism in the 1970s, Titonel explains the genesis of his latest series of works, 15 new paintings, all from 2014:

"In the 1960s I became interested in the paintings of primitive man, the marks and forms of which succinctly express the emotional contact between man and nature. Over the years I developed a creative language of my own that, while maintaining these specific requisites, broadened to include new problems brought on by social change and the ensuing, relative economic and cultural developments.

The 'graffiti' in these recent works was inspired by the New Primitives who taint the walls of our cities. I take what I need from these provocative and untamed gestures to create a cultivated image in conjunction with nature".

Clouds, in their continuous transformation, evoke introspective thoughts that slowly rise to the conscious surface, freeing the imagination. In Angelo Titonel's paintings, this process is translated into strokes and gestures that form a dialectic relationship with the cloud itself, to achieve a new and complex poetry of visual art.

ANGELO TITONEL
Angelo Titonel (b. 1938, Cornuda, Italy) graduated from the "Castello Sforzesco" School of Applied Arts in Milan. He began working as a graphic designer and art director in international advertising agencies but eventually abandoned this career to devote himself to painting.