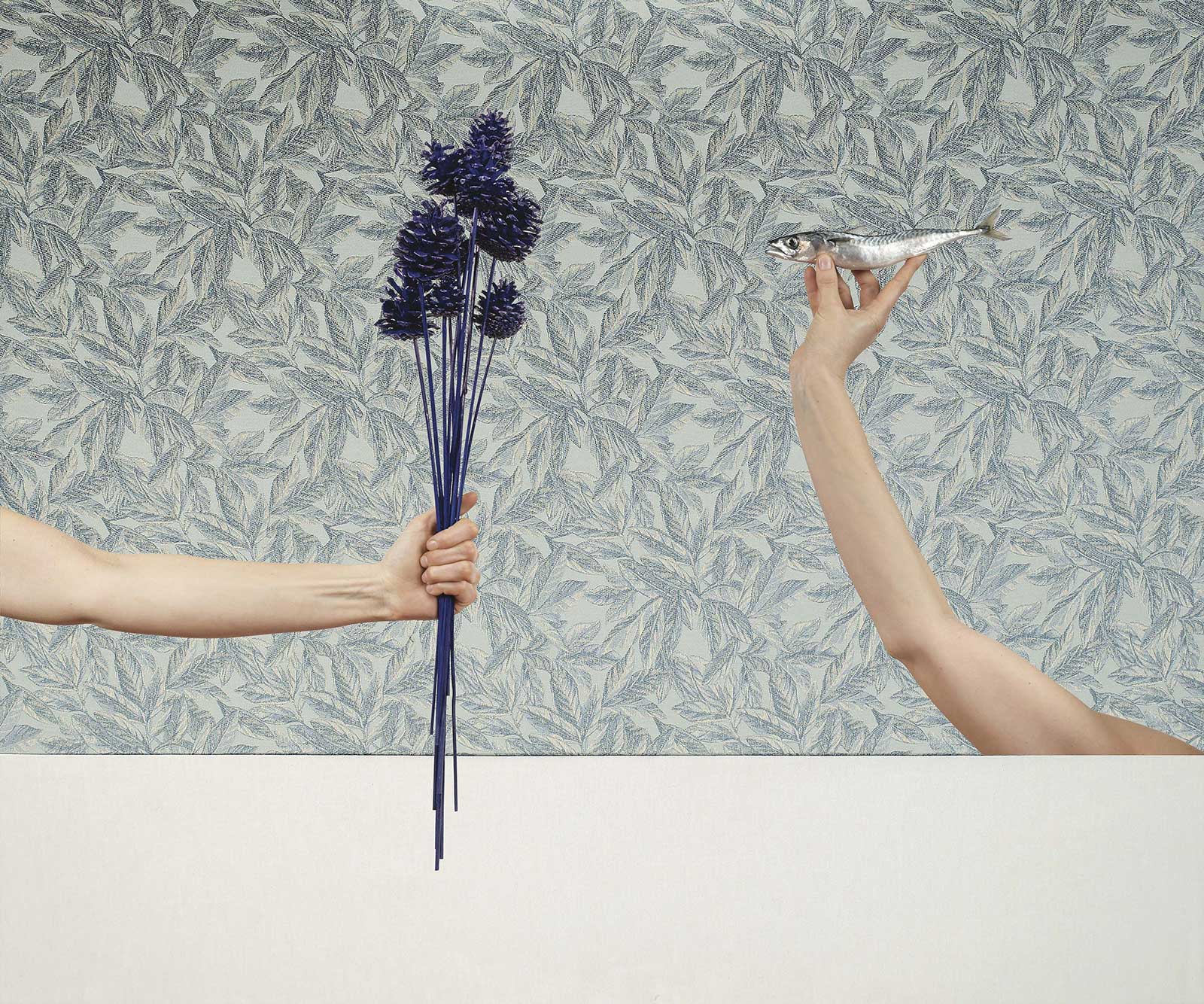 Maja Arte Contemporanea is delighted to present Lucia Crisci’s first solo exhibit within its walls. Eleven works from three different collections – “Portraits”; “Actions”; “Papers” – are on display in this show, which is significantly entitled, “Intimacies and Parodies.”

Winner of the “Arte in Arti e Mestieri” (Suzzara, 2016) award, Crisci was born in Rome in 1981. Her style matches the complexity of her worldview; different media and modes of communication merge and mingle in her works: photography and sewing; pastiche and photomontage.

In the collections “Actions” and “Portraits”, she draws inspiration from her love of fabrics, which become the foundational element in the pieces. She chooses the textiles carefully; they might be embroidered, hand-printed or sewn, and they carry within their patterns the history of their making or destination. Mounted on a loom, each fabric is set against a plexiglass pane with a picture printed on it. In the collection “Portraits,” the photograph is always self-portrait of the artist’s silhouette. This is then covered by a different fabric in each piece; at times these have imaginative prints on them, at others, they are a single, solid color. Each photograph is set against a background covered in the same fabric.

“Lucia Crisci’s artistic meditation thus investigates the idea of a supressed individual identity, which is subdued by being absorbed into a category, be it a social or religious group. The world she portrays is a world that has conformed to standardized models; at times these are imposed; other times they are sought, but they are never fully identifiable, as they willingly fade into the background,” Giulia Tulini writes in her critical essay on the exhibit.

In the collection “Actions” the fabric becomes the starting point for a new story, which sees Crisci as both narrator and character. The precious, static prints awaken through the touch of the extraneous ichonographic elements printed on the plexiglass. Crisci says about this collection, “the textiles’ patterns have specific roles or characteristics that are altered, overturned, and investigated by bringing attention to a tiny defect, a color, or the atmosphere they can create. Ultimately, they are used to tell a new tale. This manipulation of the fabrics, which may at times seem absurd, intends to rob them of their identity and purpose, so as to challenge the viewer to observe things beyond their surface, and thus exalt the senses.”

Paper is the star of the third series of works. Once again, the viewer is tricked. Turned into a ‘mock fabric’ by being sewn with needle and thread, the paper stuns its viewer. The series exposes “the frailty of paper trying to behave as a textile.”

In the catalogue that accompanies the show Rosanna Ruscio writes, “To understand Lucia Crisci’s complex investigation into matter and structure, one must evaluate her works as places where the creative and figurative investigation prevails over matter, and where the need to manipulate that matter with one’s hands becomes urgent. In the first case, each detail becomes a piece in a communicative web in which the artist indulges, as we see in the paper series. In the second, her way of parodying herself by covering her features with the textiles and her presence in the photographs, which both capture her identity and disperse it, reflect a very specific worldview: she passionately seeks to know objective reality, and this brings her to explore both a capricious subjectivity and pure objectivity, uncovering the paradoxes that ie within this distinction.” 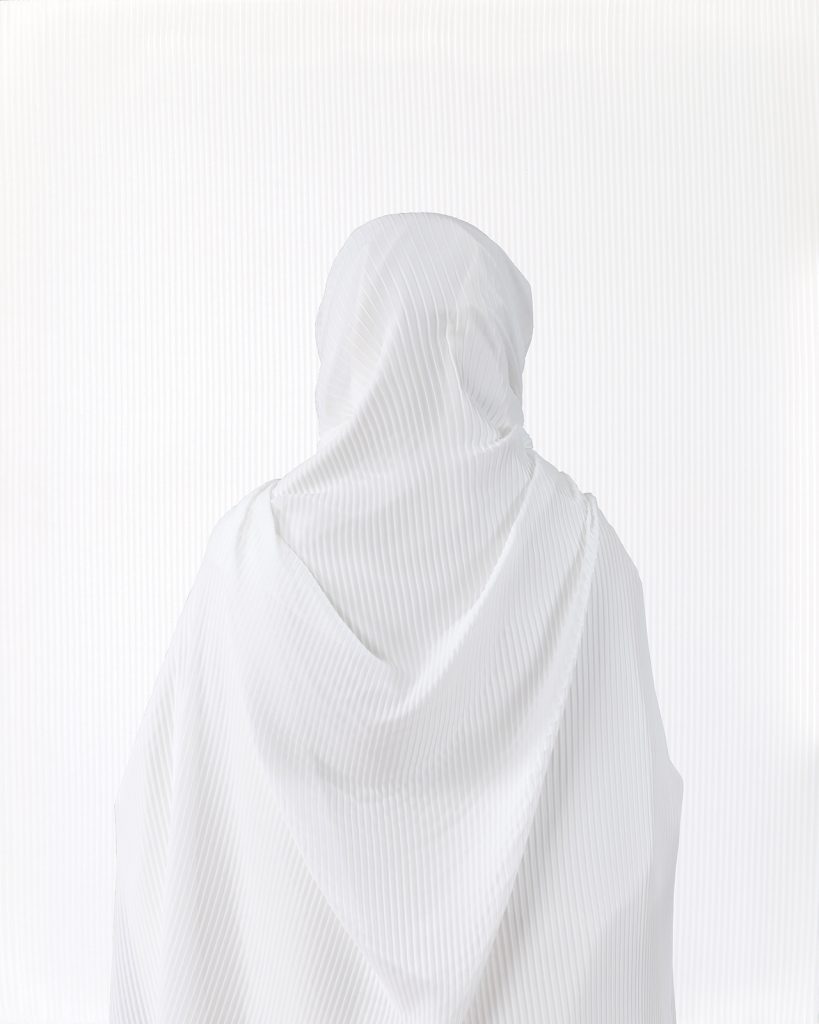 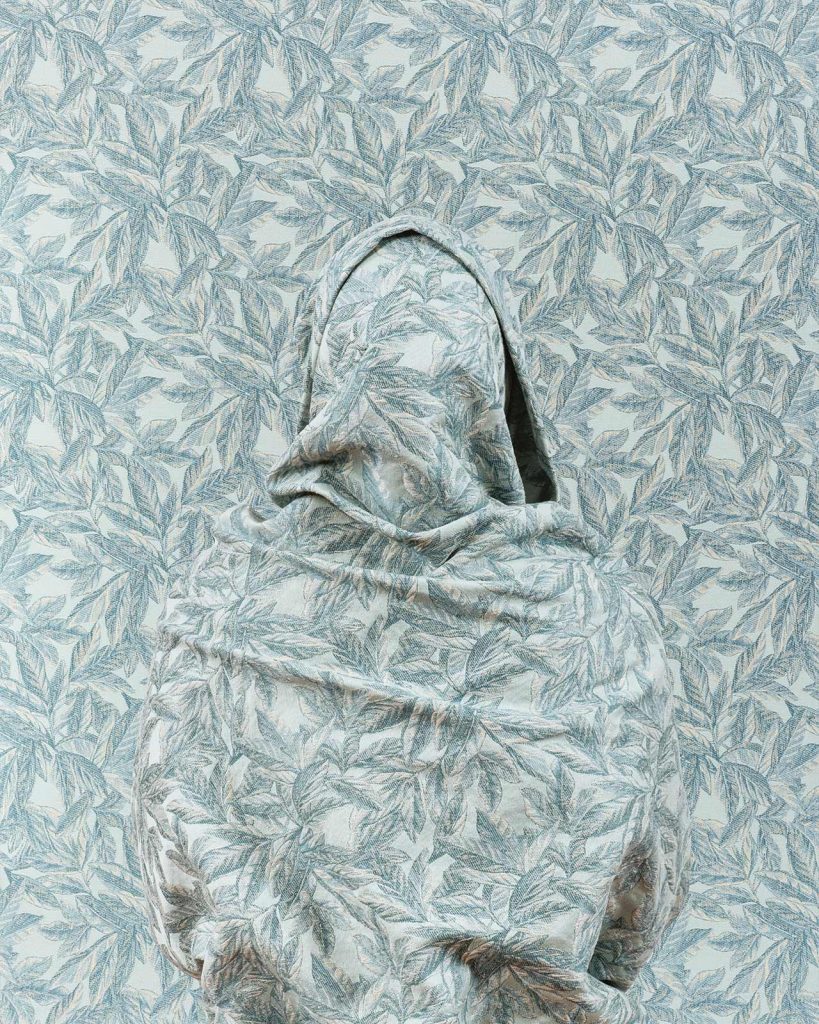 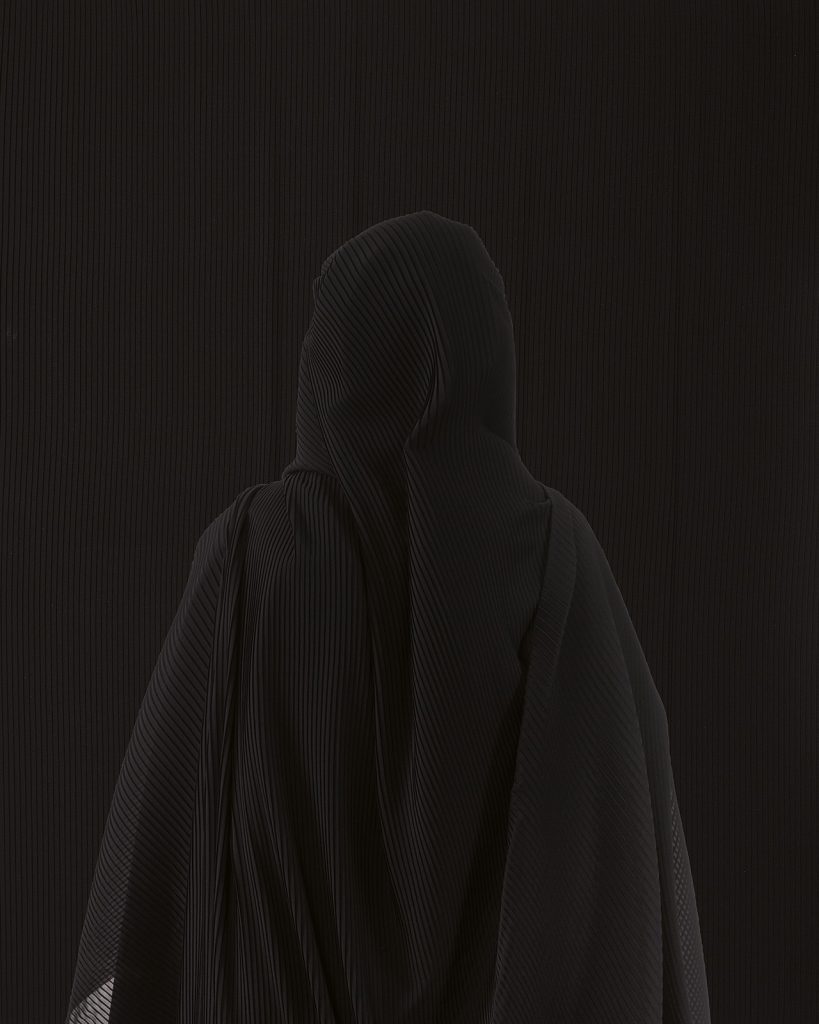 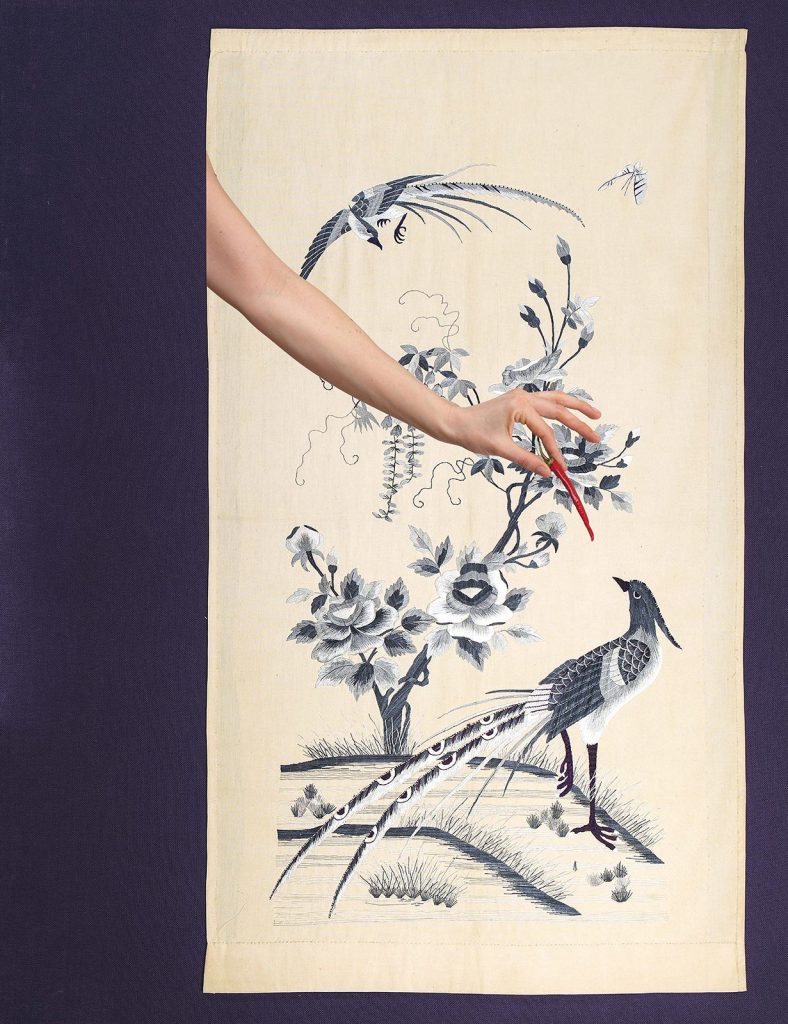 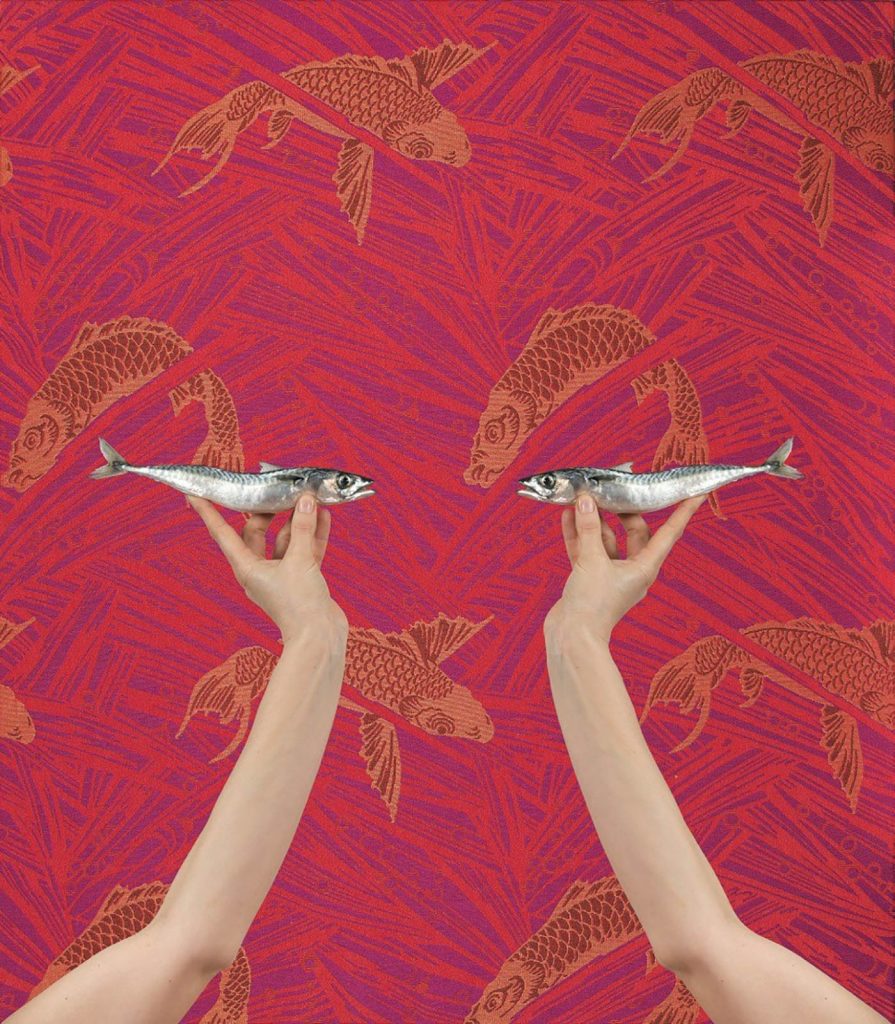 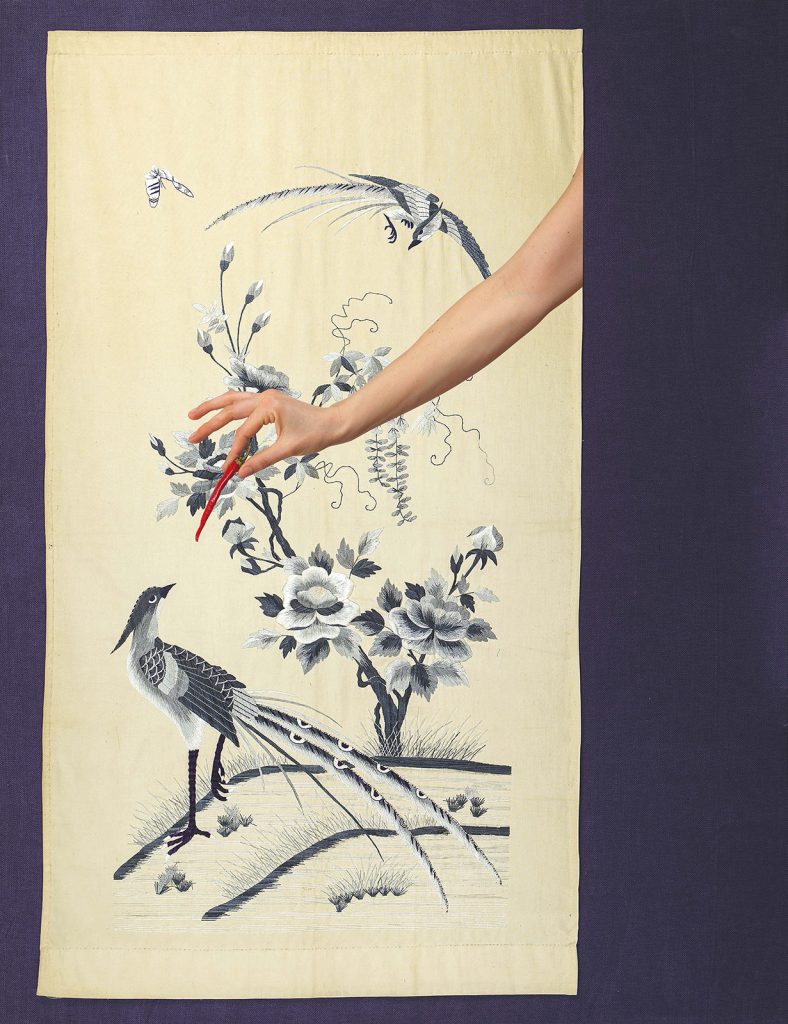 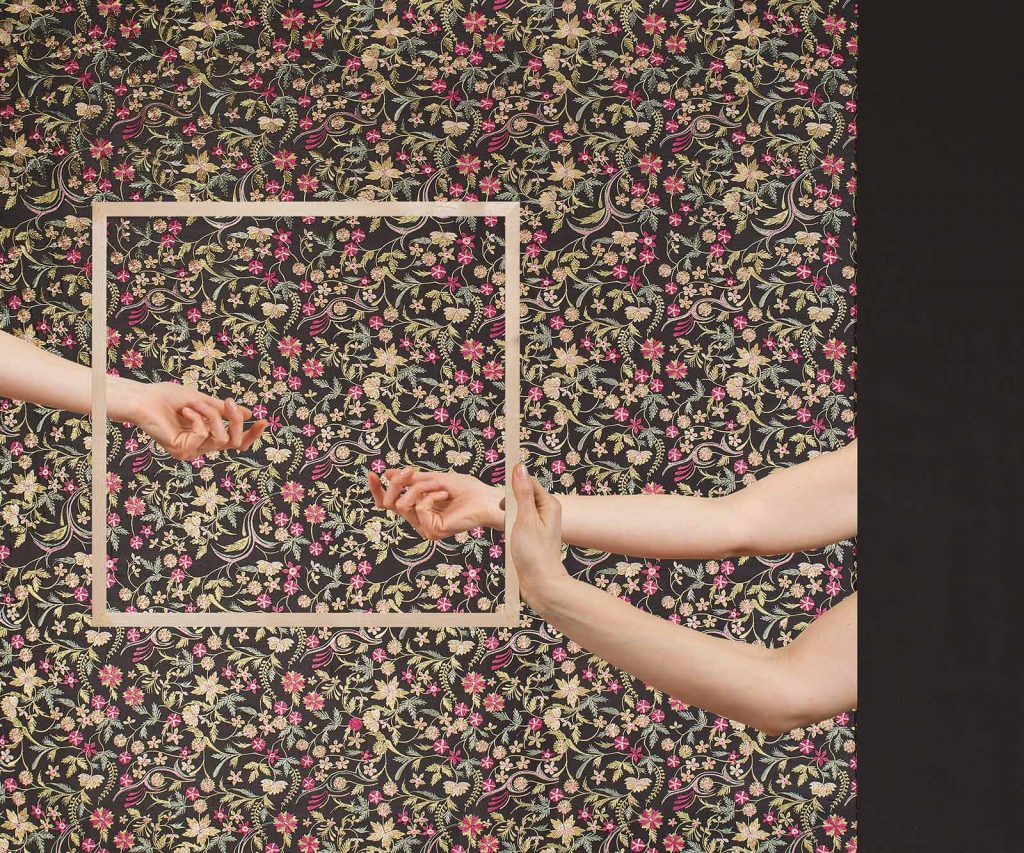 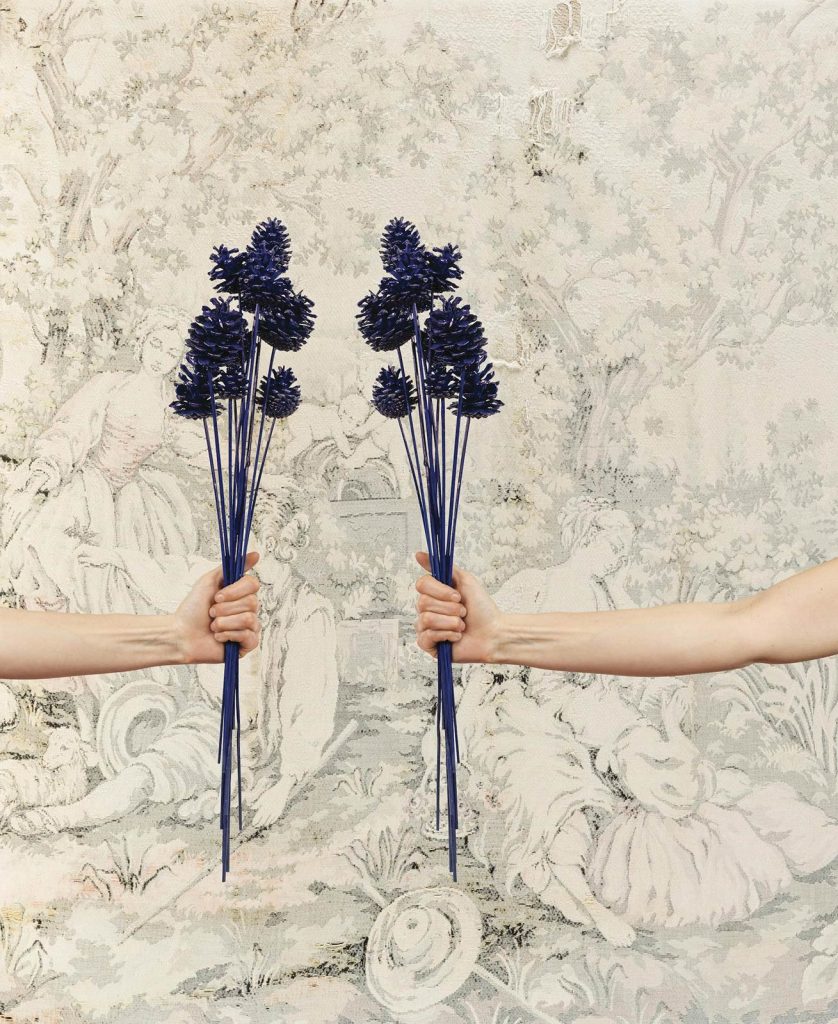 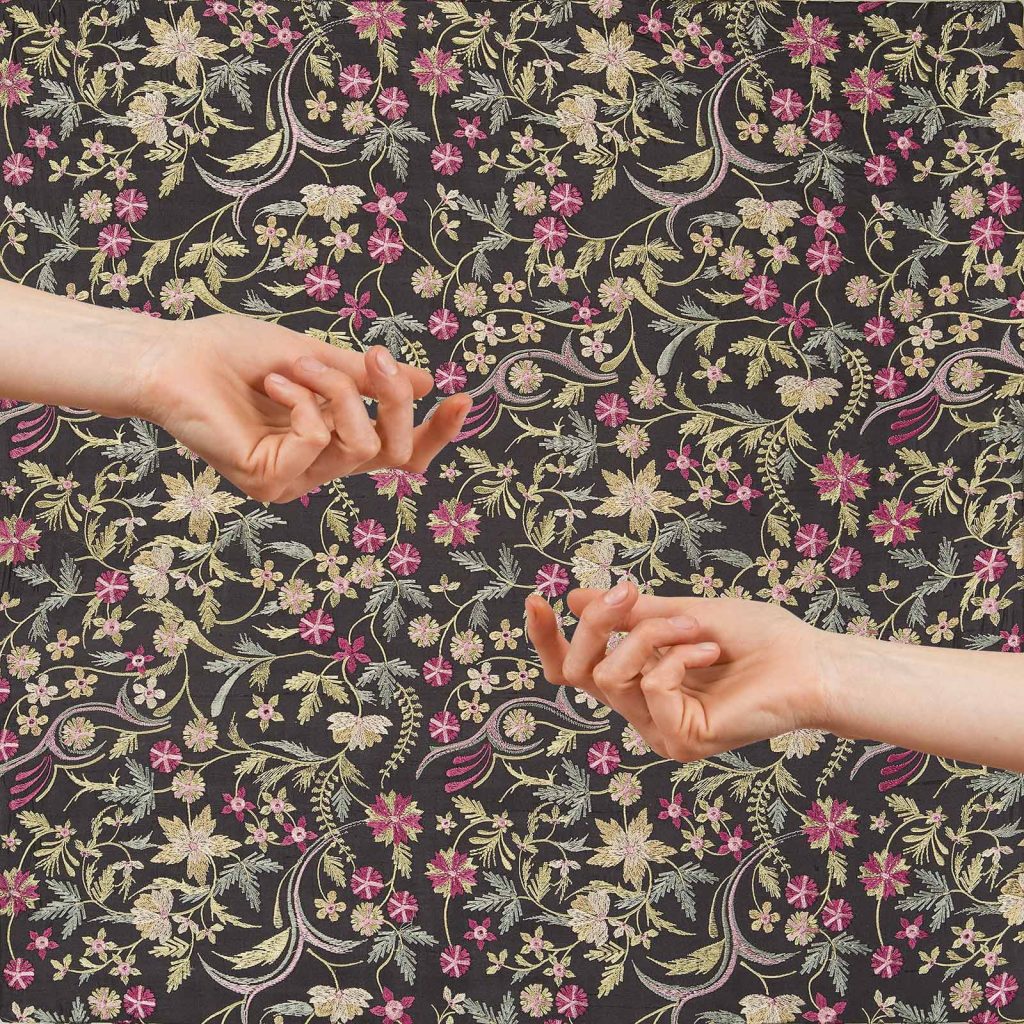 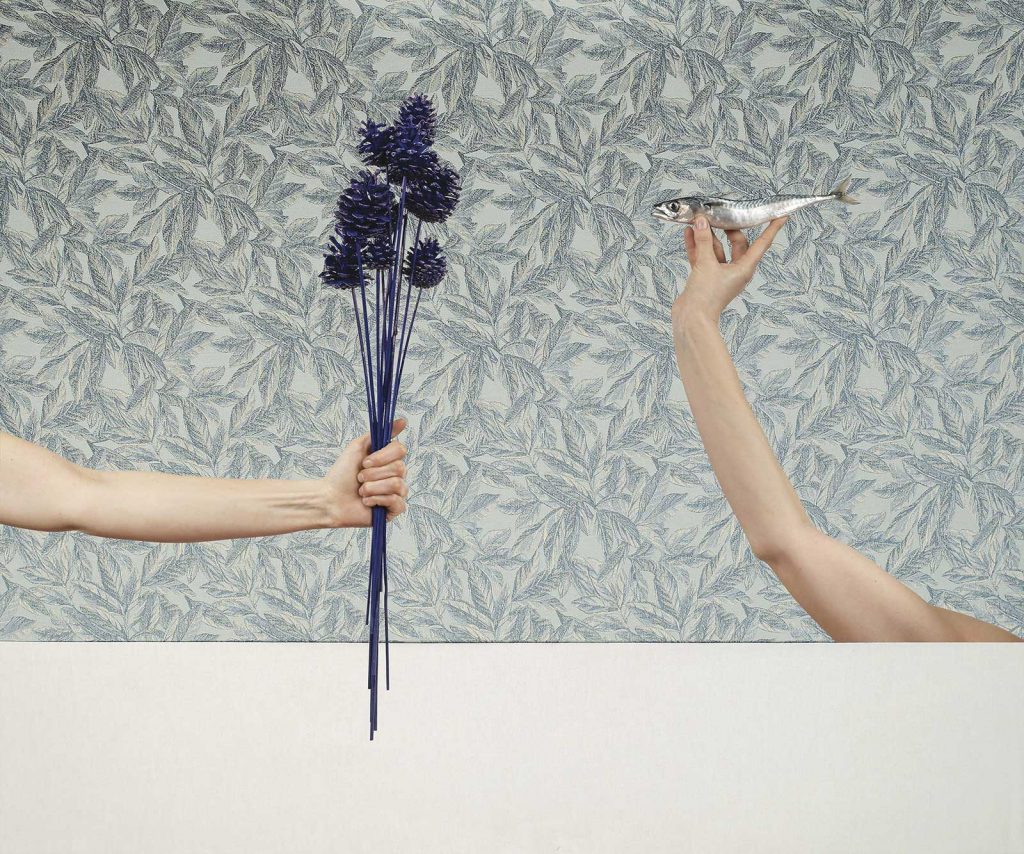 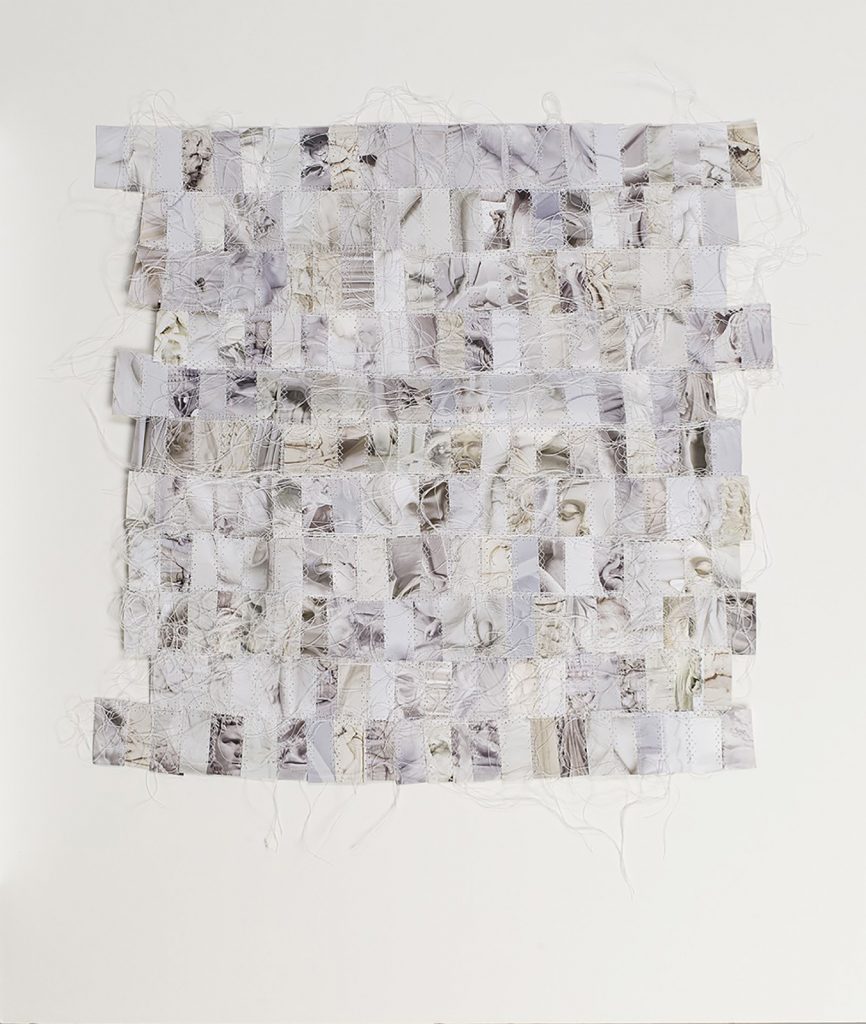 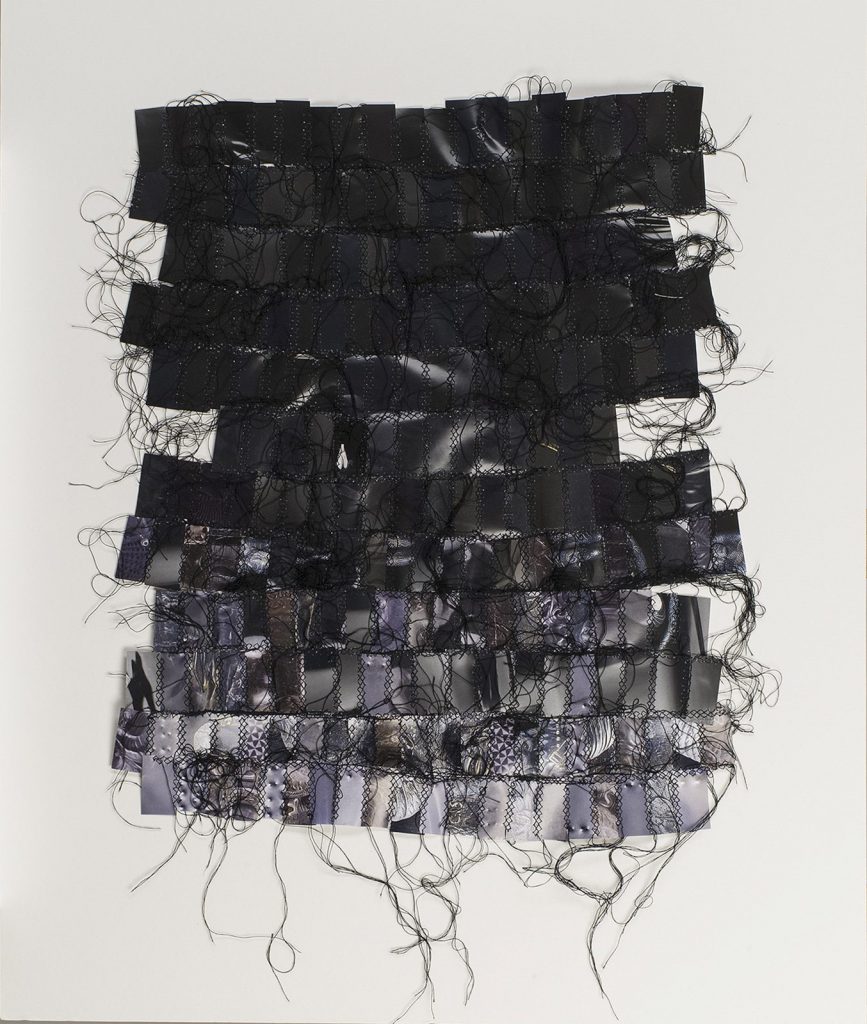 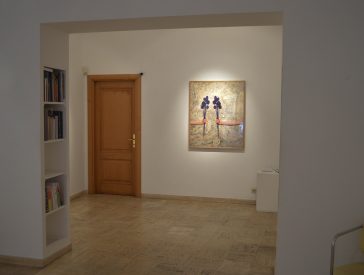 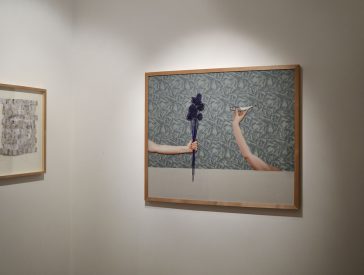 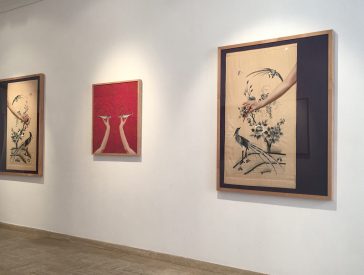 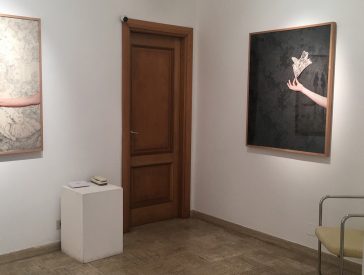 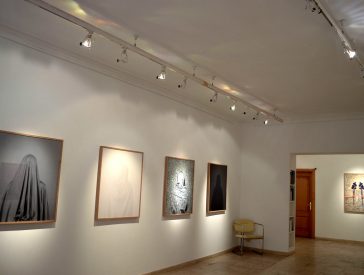 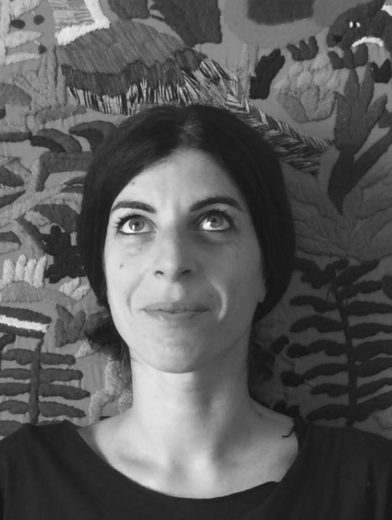