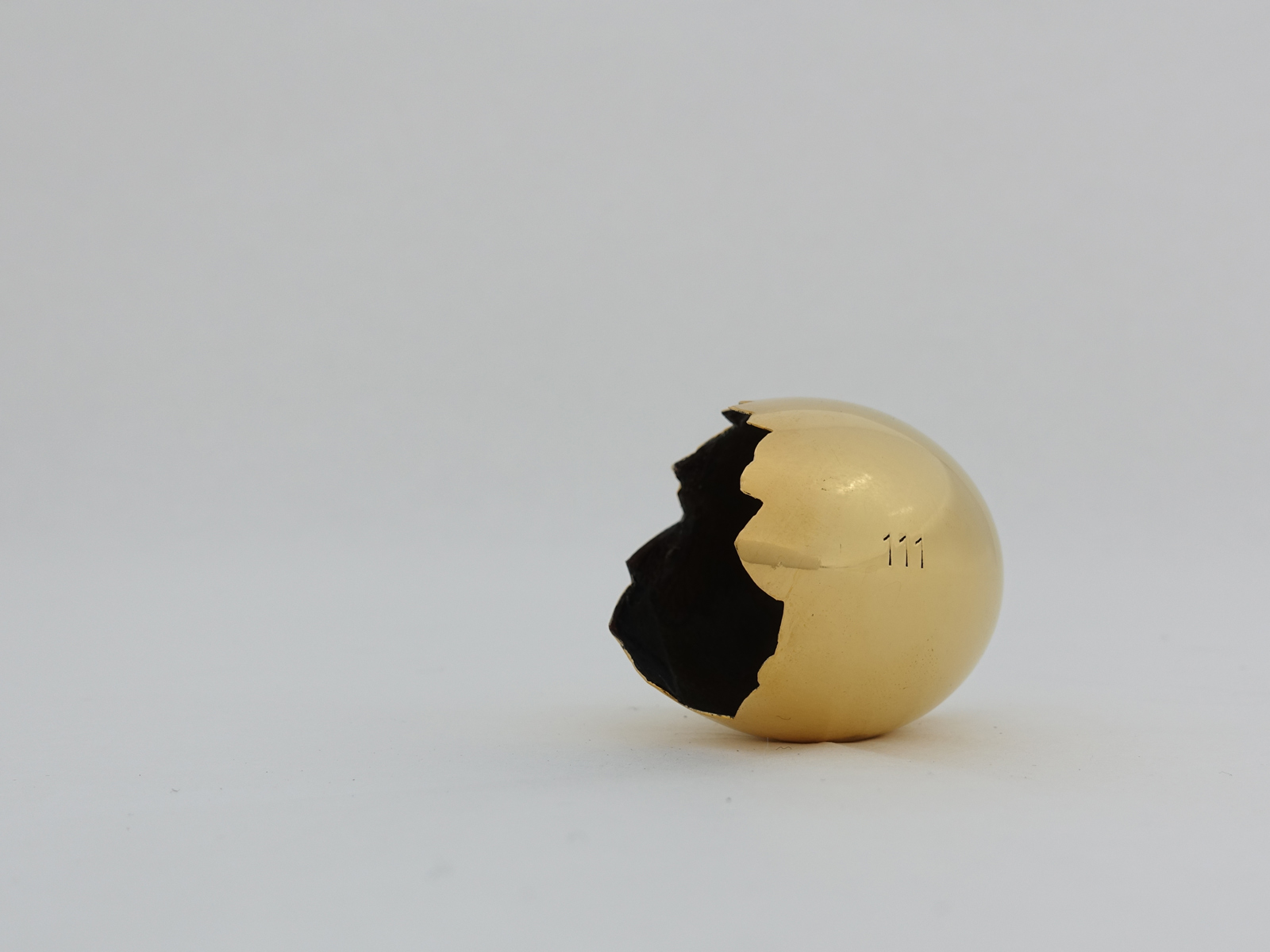 The sculpted pieces are the outcome of the Motherhood performance held by Jovanović in February 2016, at the “O3one Gallery” in Belgrade. During the performance, Jovanović struck 246 eggs hanging from the ceiling, rupturing them one-by-one. The eggs symbolically numbered each fertile day from the artist’s first menstruation to the date of the performance.

The ruptured shells were then turned into unique electroformed copper sculptures, numbered and plated in 24K gold.

“Each egg I broke during the performance is a missed opportunity at maternity in the name of art,” Jovanović says not without a touch of irony. Her pieces alchemically transform what might otherwise exist as a sacrilege in dystopian worlds such as the one imagined by Margareth Atwood in “The Handmaid’s Tale”.

Anja Foerschner notes, “through this work, Jovanović provides an ironic counter perspective to the destruction of her eggs in her performance: not only are the eggs being carefully restored in the installation, they — and thus her ‘wasted opportunities’ — have even been literally turned into gold.”

The performance Motherhood is rooted in a moment of profound change for Jovanović one that brought her to revisit her life choices and reflect on the status of ‘female artist’ in a patriarchal society. The installation is thus surprisingly transformative, becoming a cathartic experience for both artist and viewer. We are welcomed by a beautiful constellation of golden eggs: these are shells but they are also the precious custodians of wishes; in them the latter travel towards their Moon where they are collected — alongside madness — with all that is lost or merely transformed.

The installation is curated by Sauro Radicchi.

Twould take too long to relate in rhyme
All the things he saw there, in that valley,
Viewed thousands upon thousands, at a time,
The results of our lives, each casualty;
Yet little or no sign of that madness
Rarely absent from Earth one must confess.
– Ludovico Ariosto, Orlando furioso (Astolfo on the Moon) / trans. A.S. Kline 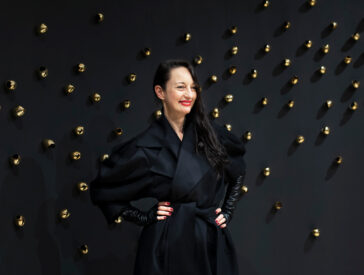 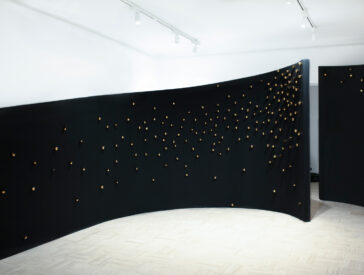 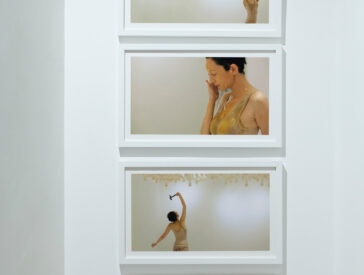 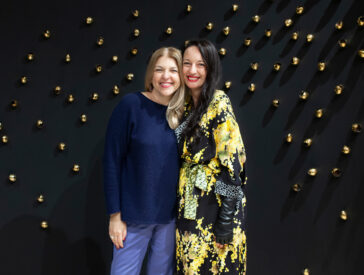 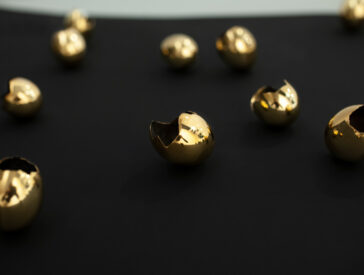 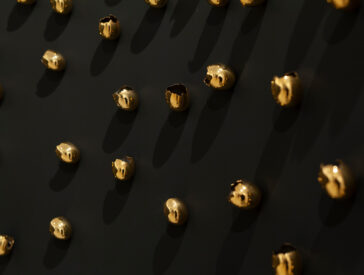 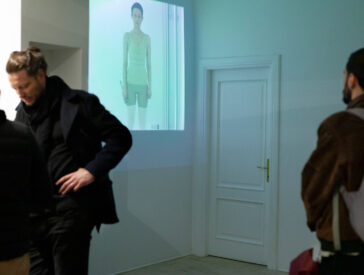 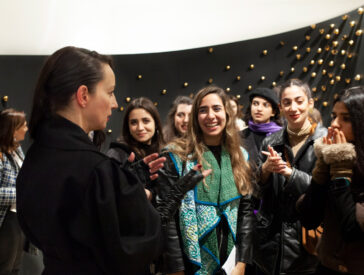 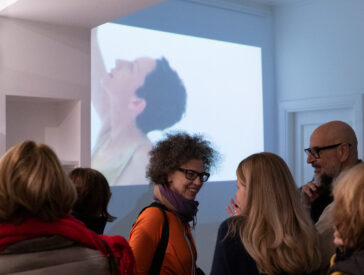 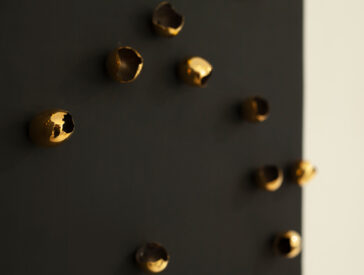 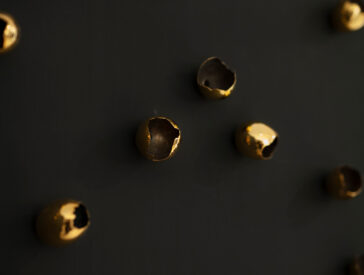 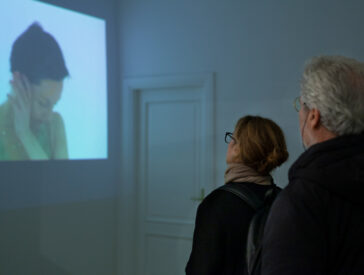 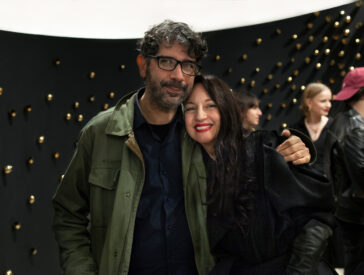 The installation “Motherhood” originated in a performance of the same title, that Marta Jovanović performed on February 2016 at O3one Art space in Belgrade. The performance derived out of the artist’s deeply personal urge to contemplate her life choices and her status as a woman artist in a patriarchal world. Having just gone through a fundamental transformation in her personal life, which forced her to reevaluate her path, her past and her future, she had to choose, once again, between society’s vision for a woman and her own way. This schism was symbolized in the performance by raw eggs, which Jovanović smashed with a hammer. The number of eggs was carefully chosen, each egg representing one fertile day in her life since she started menstruating at age 16. She states with an ironic smirk that each egg she cracked in the performance is one chance of becoming a “real woman”, a mother that she “wasted on art.”

Jovanović faced a decision that many women have to make and that for most women is accompanied by substantial doubt and a paralyzing feeling of being torn. Do I want to become a mother or do I want to pursue my career? It also is a decision that possibly puts enormous strain on relationships and even friendships. Of course, it does not necessarily need to be “either” “or”, but sometimes it has to be. And what will the implications be? Will I regret becoming a mother and wife and having to put my career on hold or even let it go entirely? Will I wish I had become a mother once I do not have the option any longer? Even though in the present day contraceptives and the increasing, yet still insufficient support systems for women have at least made a choice possible, that choice still needs to be made and its implications, which are grave and long-term, considered carefully.

In its sculptural transformation, “Motherhood” is conceived as an installation containing 267 eggs as of December 2017. It is a work-in process as the artist’s future is impossible to predict: it will only be either through pregnancy or by entering menopause that the work’s final state will be determined.

The raw eggs that were used in the “Motherhood” performance are turned into unique sculptures in the installation, with each egg crafted in electroformed copper and gold-plated with 24K gold. Through this work, Jovanović provides an ironic counter perspective to the destruction of her eggs in her performance: not only are the eggs being carefully restored in the installation, they – and thus her “wasted” opportunities – have even been literally turned into gold.

A stretch in flight, a fluctuating sea, but the front is the position: the sea fluctuates in front, stretched out vertically. Gravity is reversed because it’s not a familiar dimension, nor is it even entirely symbolic. Real, in front of us, we rub our eyes but we are awake.

The sea dances motionless full of life and absence of context. This is the theme: life, golden life, open life, perhaps dispersed. The waves consolidate into ovals like words spoken in sequence, frozen in front of us from the last wave. They seemed obsessively the same from the start but have different endings, which are the openings, the broken void, the sense of being in the world, the divine speech that speaks the world. Like image and likeness it means same and different at the same time. In the afflatus there is birth, an underlying theme floating between the coils of a light wind that moves the words, which remain solid in front of them like salt rocks ready to crumble but which instead resist.

Although wounded, broken, hit, missing, words are matter, matter is soon a memory, persistence of the retina, inner wounds, shortcomings. The emptiness obtained from the blow remains to remind us that everything was present, perfect and eternal.

All this takes place in an environment that opens up to new abilities to perceive oneself, wrapped up in a thought and penetrated by solid clouds like rare certainties in the mind of the improbable being alive and constant. Finally, it is a space of female being that can be traveled by all, always listenable but not experienced by all. A space of the ovum seen as meaning itself, Courbet’s The Origin of the World, a new open perspective of a deliberately ambiguous visual thought. Finally, a space that one crosses dominated by this solidification, hanging, open, wavering and tinkling, frozen in perception, in the absence of wind. 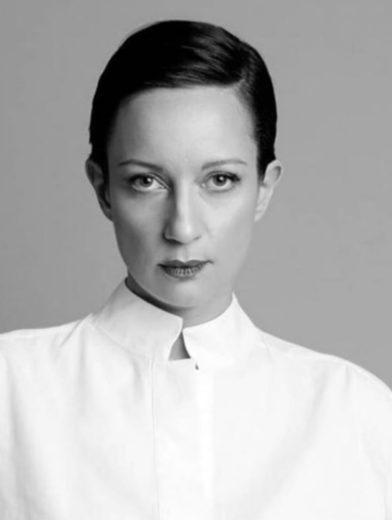