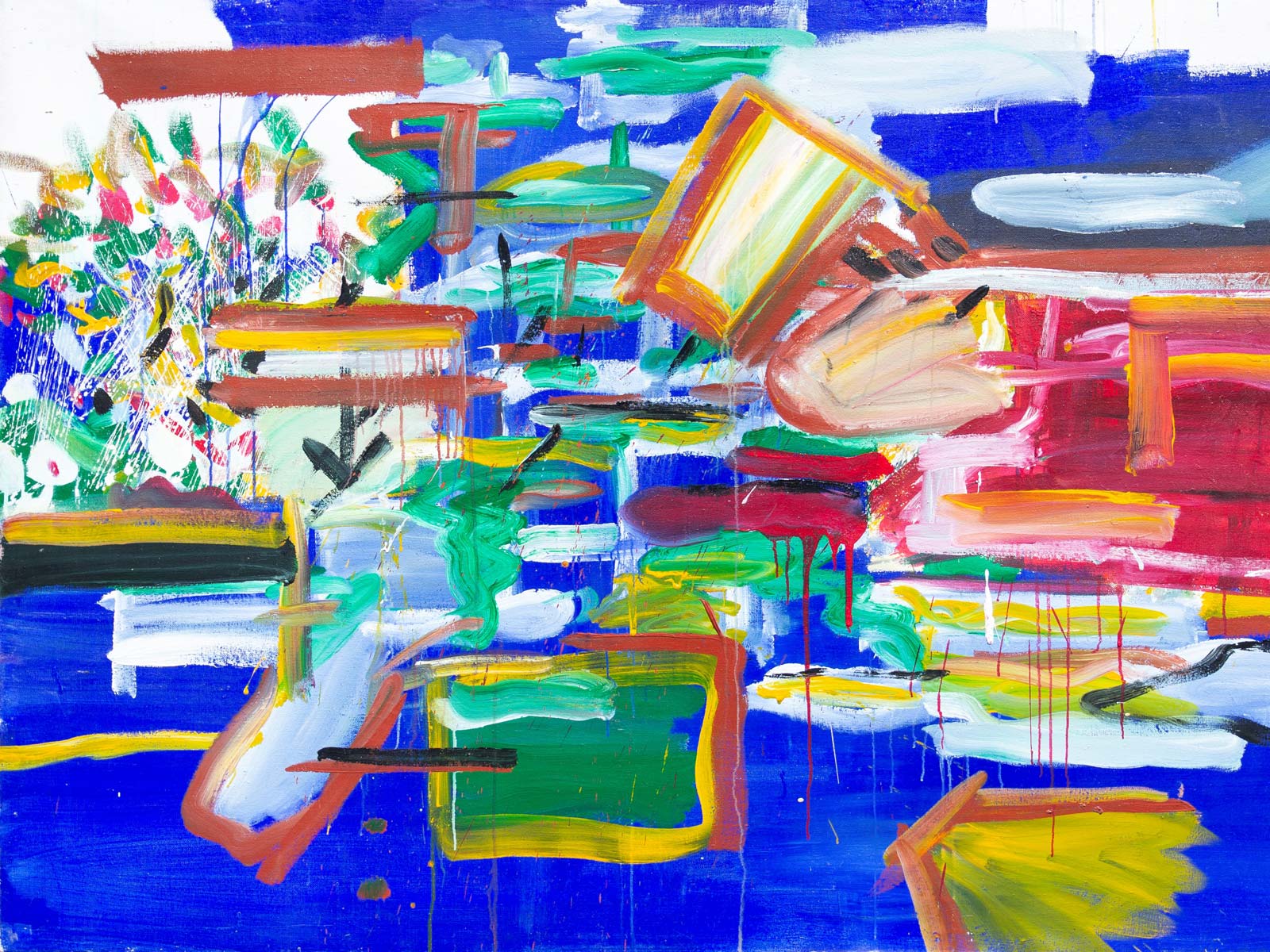 Maja Arte Contemporanea is delighted to host the personal exhibition of Angelo Azzellini (1961 – 1995)  showing a collection of precious and unusual artworks that were painted in the early 90’s by the Apulian artist who passed at the young age of only 34.

Angelo Azzellini was born in Rodi Garganico (Italy) in 1961. At the age of 14 he moved to Turin to study at the Artistic College before continuing his studies at the Academy of Fine Arts in Urbino. He then spent periods of his short life in the United States, Germany, England and China, later living in Milan and lastly in Rome.

Azzellini intends painting as a form of meditation, as a way of being in a whole silence state where the full awareness of what life offers in that very moment expands in an unbounded condition of love and innocence. Starting from solid drawing studies, Azzellini progressively immersed himself in gestural abstraction which enabled him to freely and stylishly infuse his paintings with energy and vigour, dialoguing with the beginnings of Abstract Expressionism. In his paintings, mostly large in size, all the strength and intensity of his feeling emerge through the colour and the pictorial material, with the characteristic roughness and density of acrylic.

For the 25th anniversary of his passing away, torredinebbiaedizioni released a dedicated booklet entitled “L’opera incompleta di Angelo Azzellini”; 225 coloured pages with an introduction of Ria Lussi and critical essays by Lorenzo Canova, Piero Castoro, Umberto Palestini, Fulvio Abate, Mariano Apa, with more than 130 artworks included and a wide selection of both academic and biographic documentation. In the text “L’incendio della pittura” (The burning of Painting) Lorenzo Canova writes:

“The thick brush strokes, both quick and pondered, the sketches and the drips spread fast on the canvas, the black tones lighten up till their explosion into yellows and reds, supported by clever shadows, greys melt into purples and all compositions pulse with chromatic nuances in continuous balance between darkness and brightness.

The brush strikes with gashes of white lead, with the controlled vigour of Azzellini’s pictorial texture that balance the canvas aggression with the depth of the colour arrangements poised by a soft and liquid vibration of the levels.

The painter is able to deliver space to its pictorial matter, to its roughness and to its density even with the acrylic technique that probably supports his need to combine the speed of drawing with his willing to spread the colour with transparencies and glazes.

Azzellini joins the talent of both speed and lightness with the genius of an accuracy hidden behind the appearances, in a syntax where the echoes of his disarmonic harmony vibrate through the barbaric melting of light and mark.” 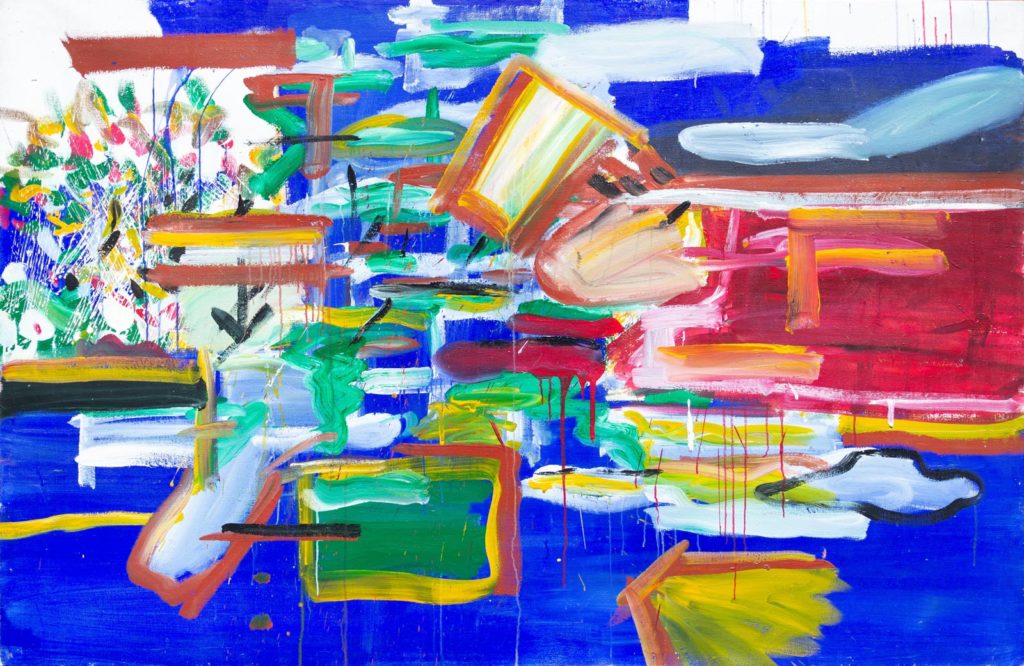 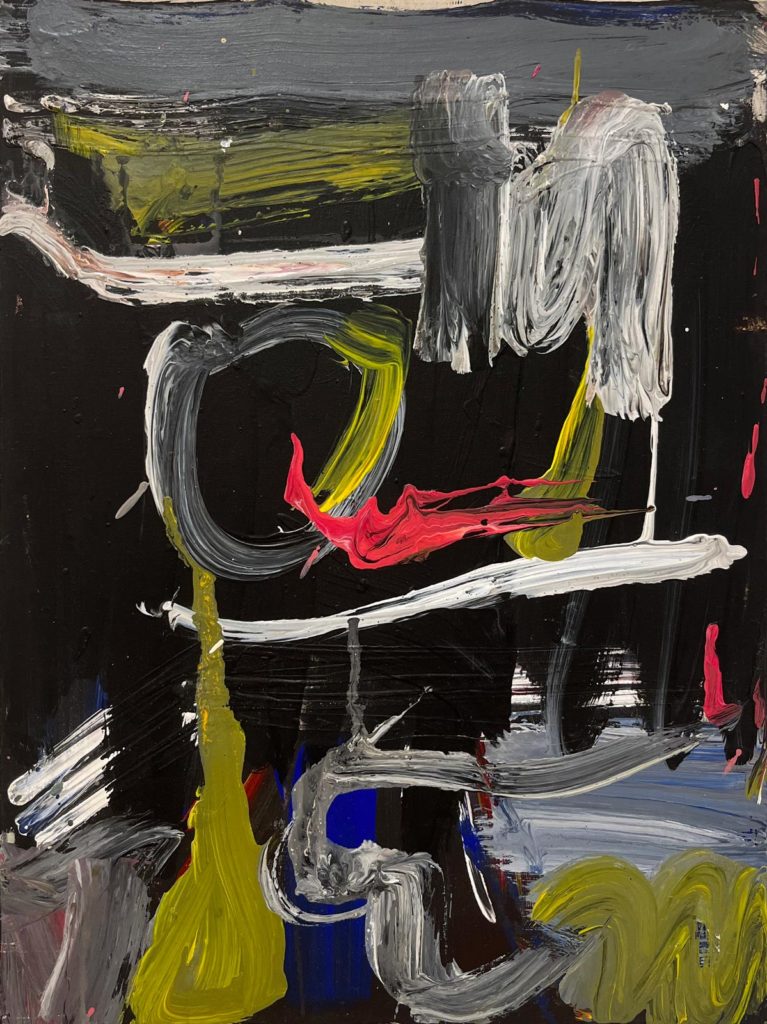 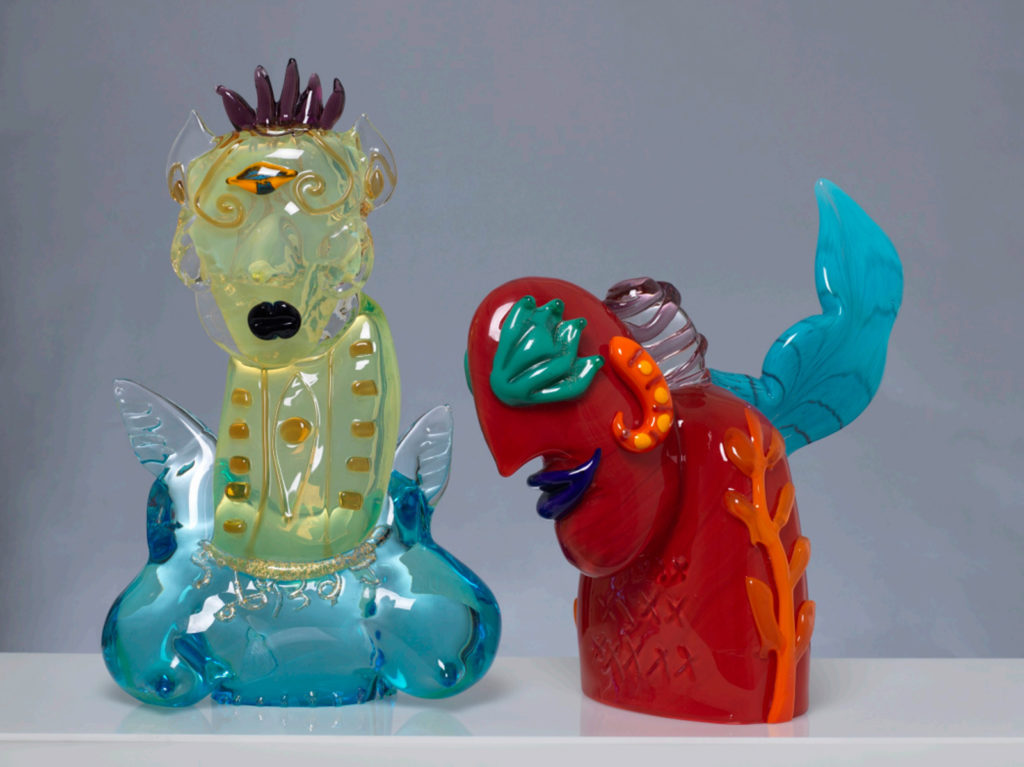 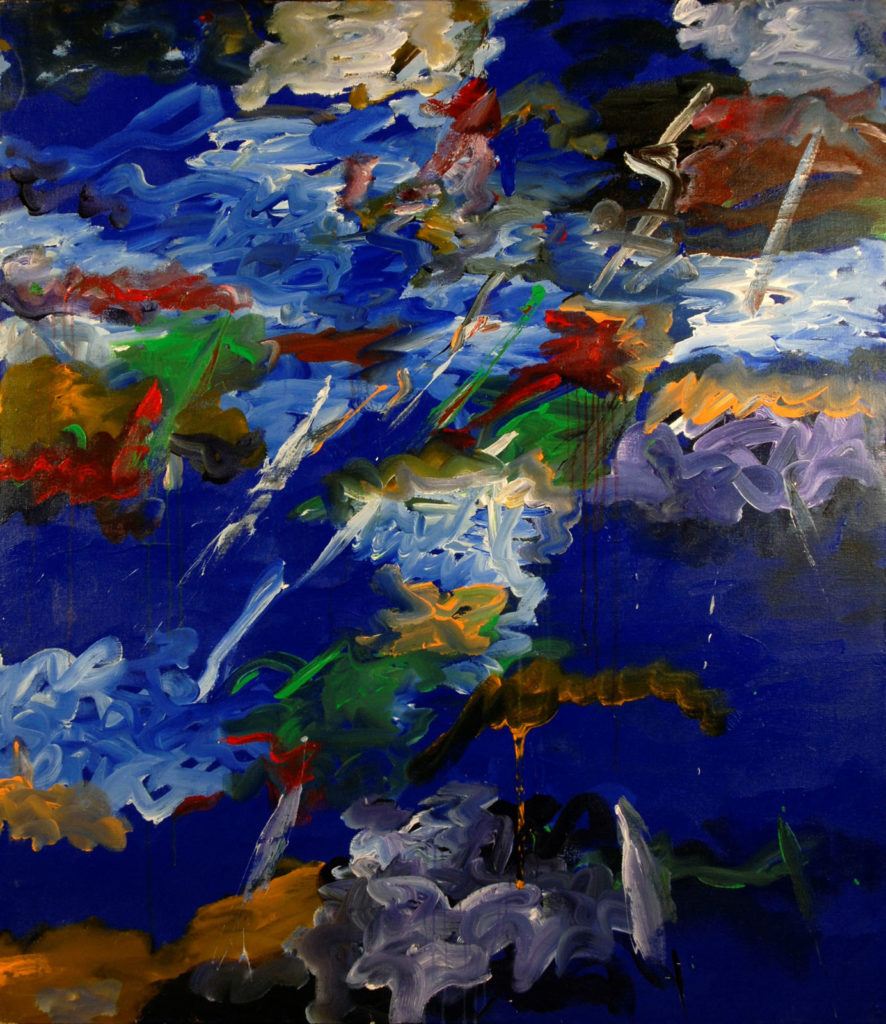 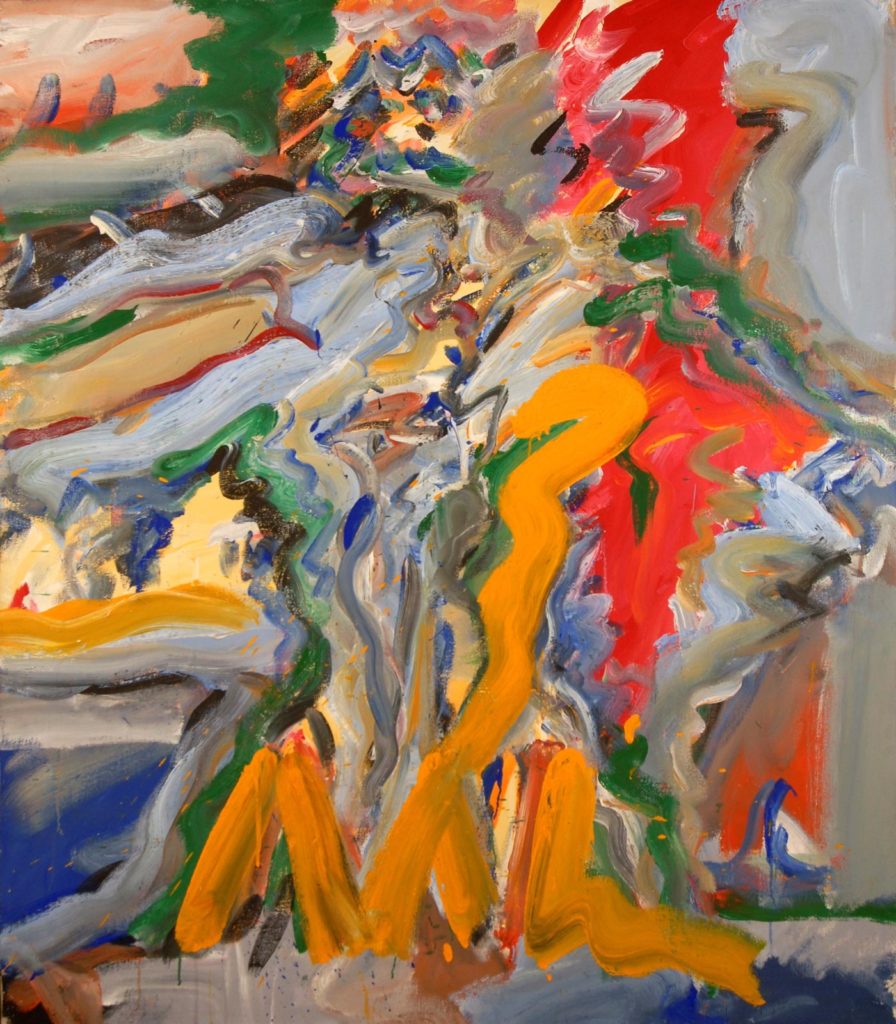 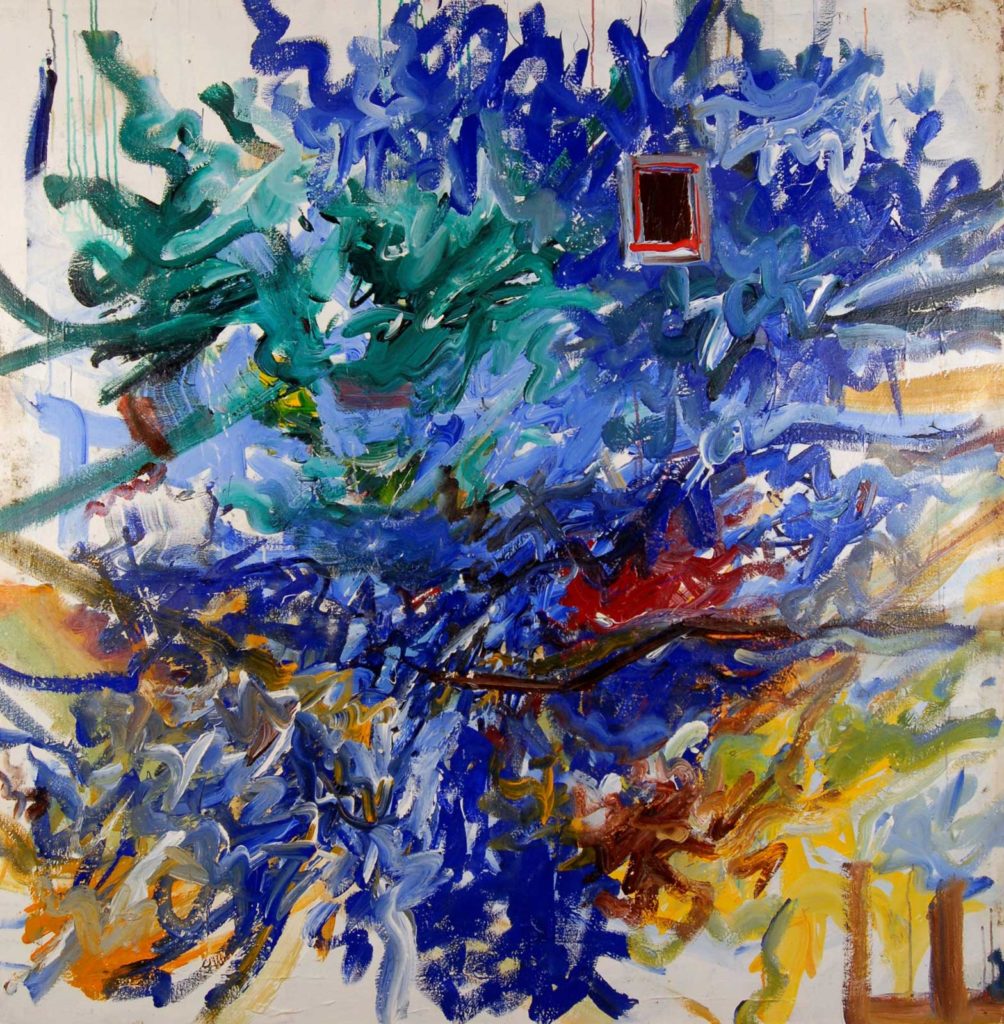 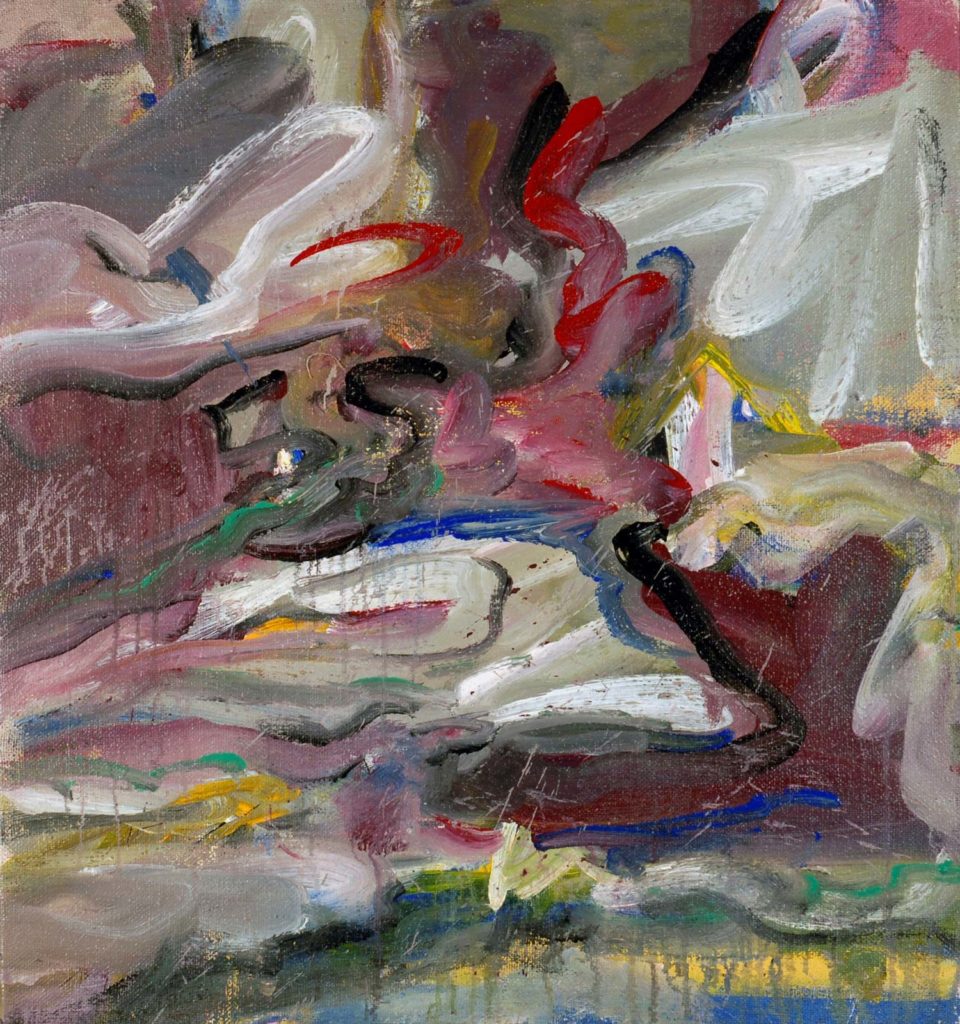 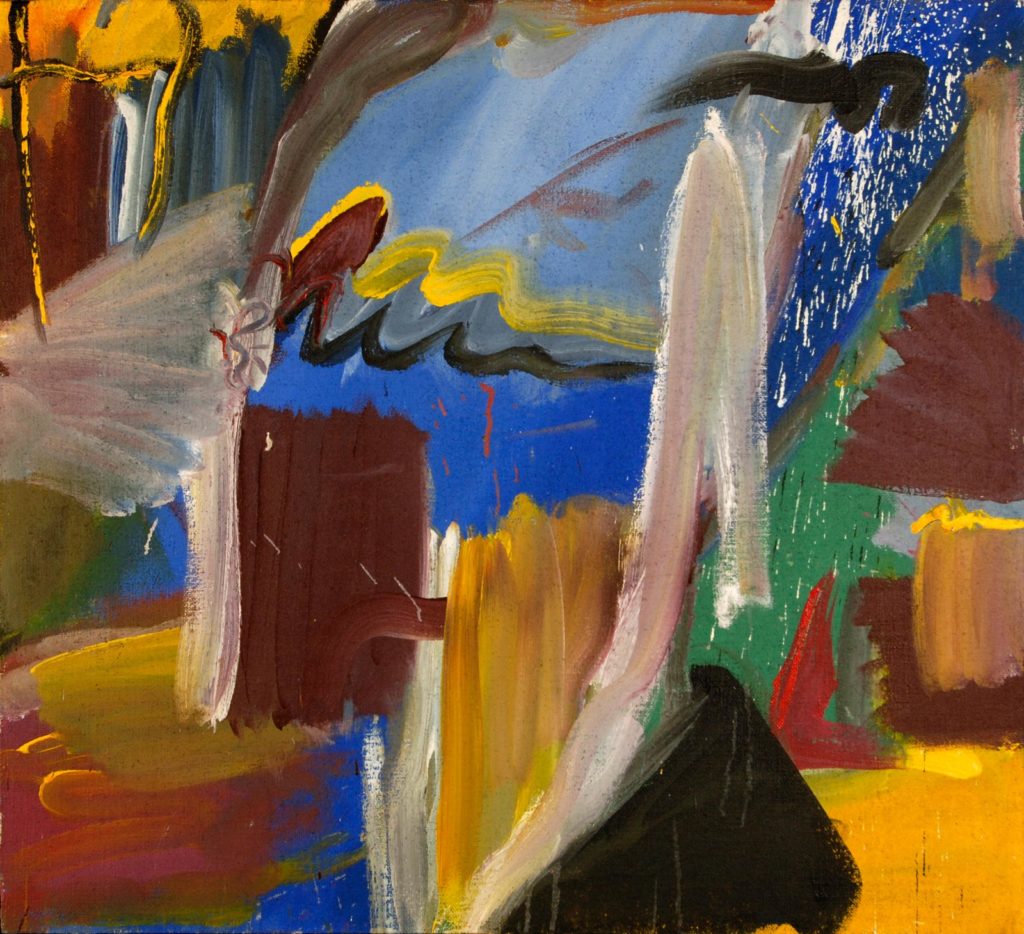 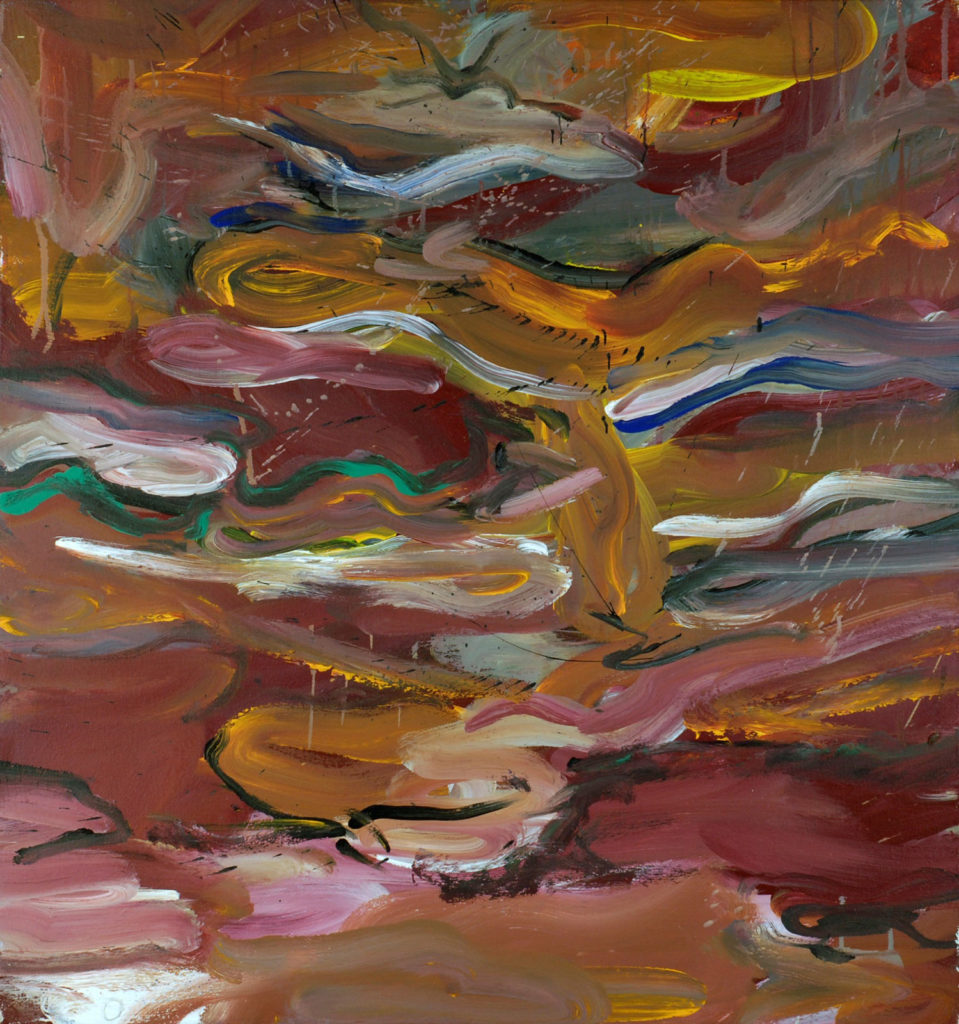 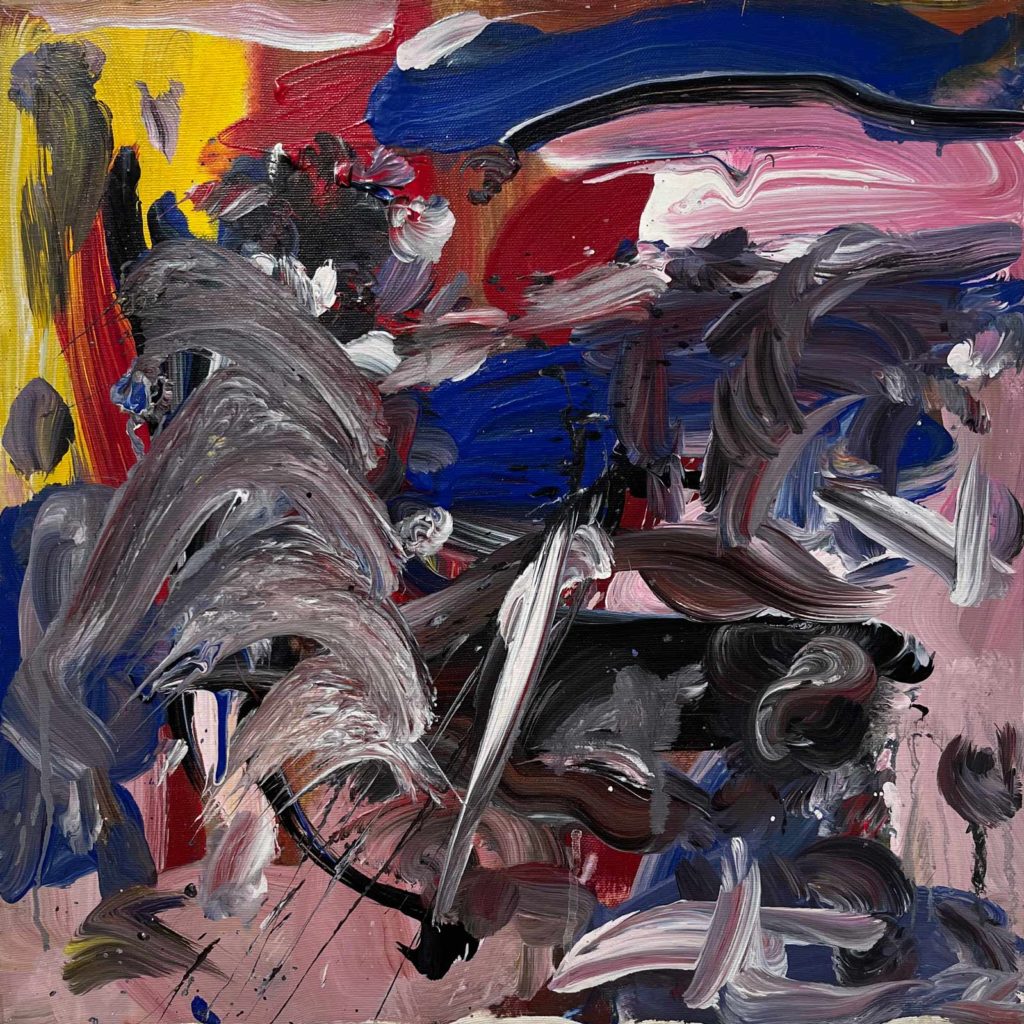 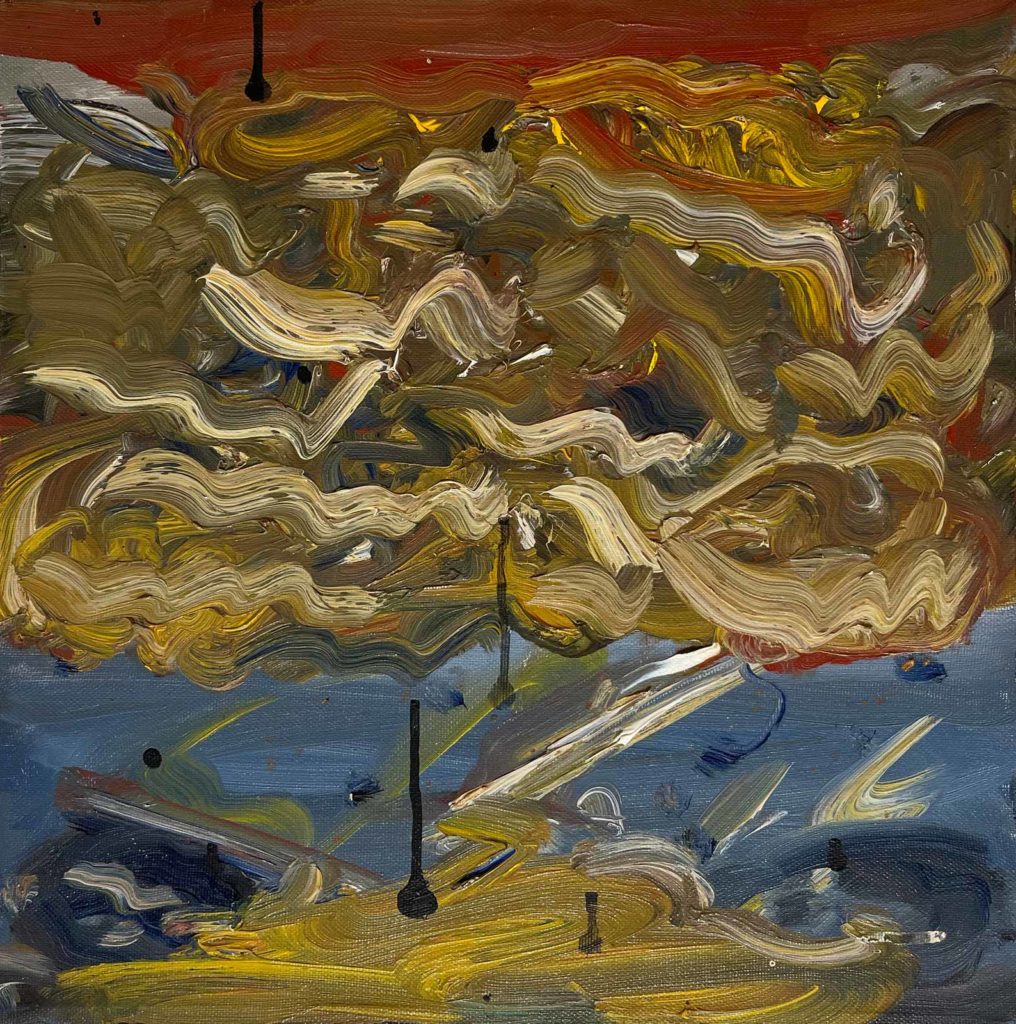 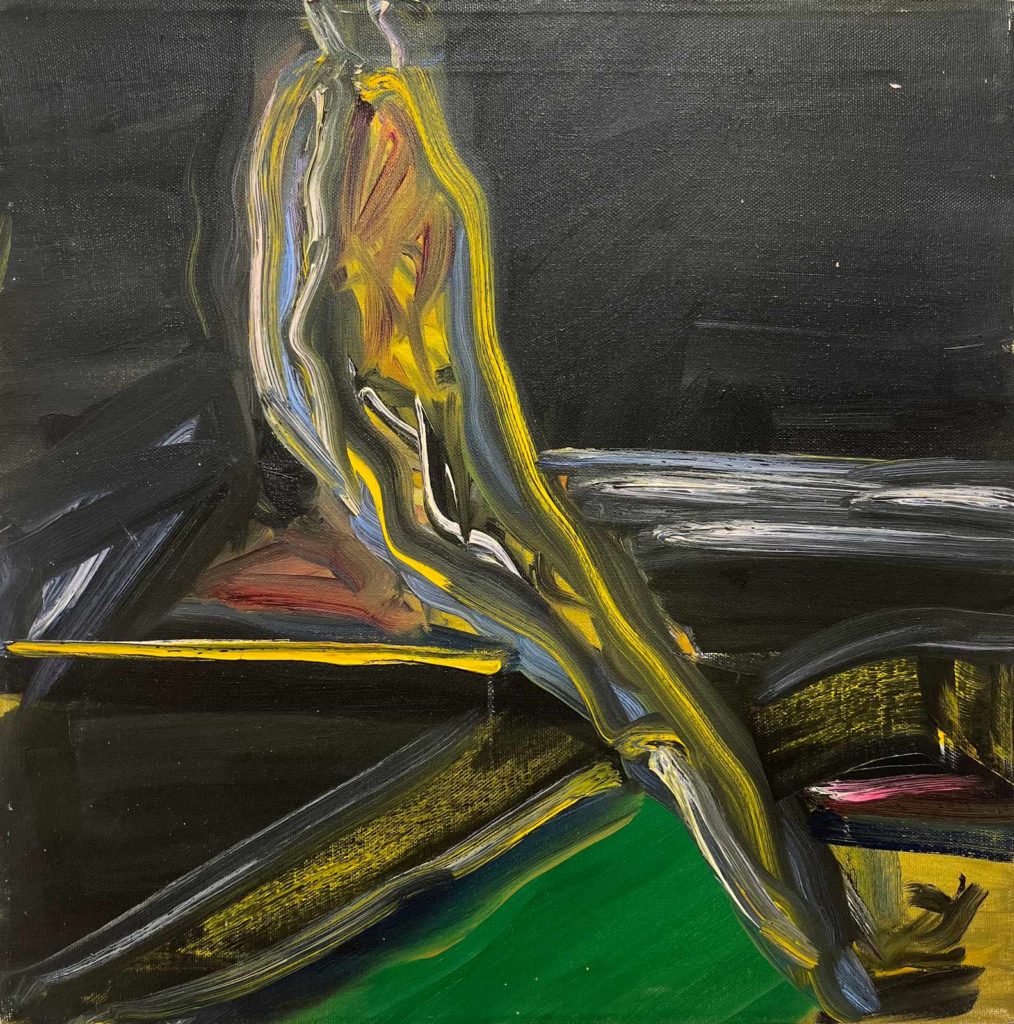 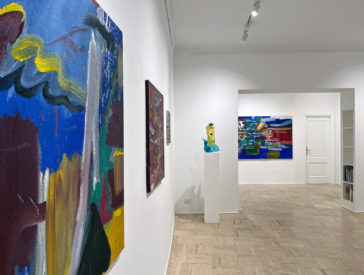 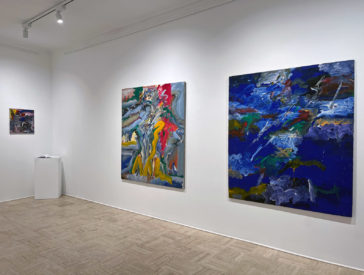 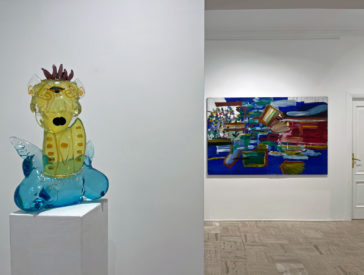 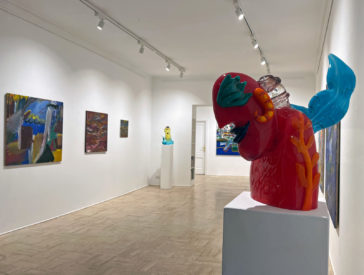 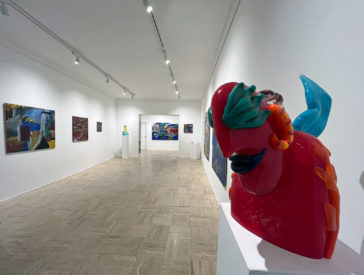 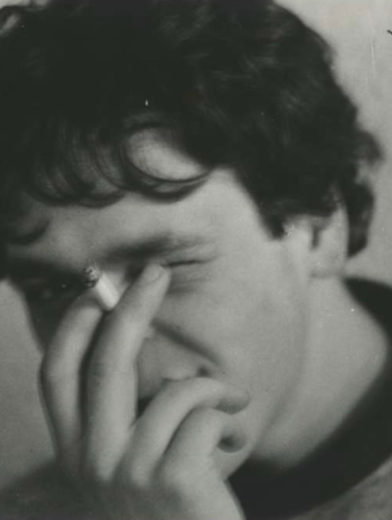